This evening saw the winners of the Eat Game Awards announced at a prestigious ceremony in London.

The event marked the culmination of a national search to find businesses and individuals championing the use of British wild game.

As well as being named champion in their category, each winner received £1,000 thanks to our generous sponsors.

More than 11,000 votes were cast by the public, with the shortlisted nominees in each category going forward to be reviewed by a panel of expert judges. 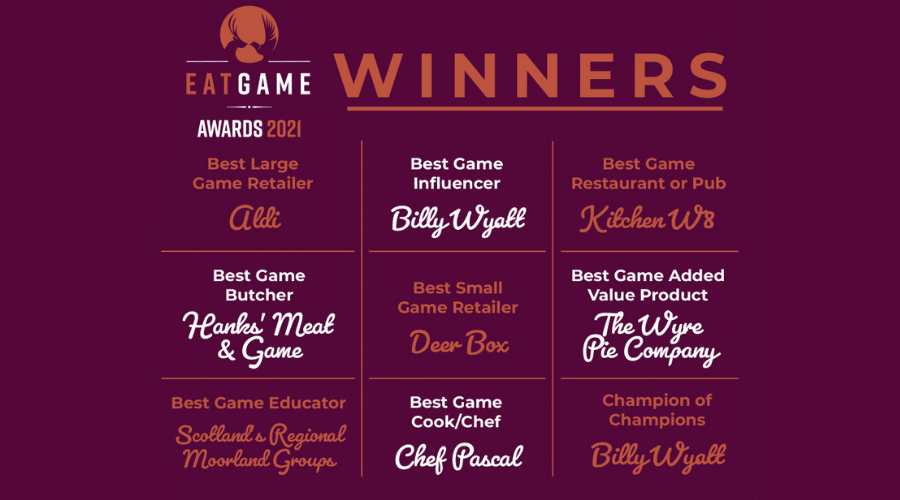 First up on the night was the award for the Fieldsports Journal Best Restaurant, which went the way of London-based Kitchen W8. Next to take to the stage was Chef Pascal, who took the honours for Best Game Cook, sponsored by Weber.

The award for Best Game Butcher, sponsored by Angel Refrigeration, went to a Herefordshire institution in the form of Hanks’ Meat & Game, who are based in Ross-on-Wye.

The Eat Game Award for Best Small Retailer, sponsored by Fisher, was presented to a returning winner in Deer Box, which is headed up by the combination of chef and restauranteur Mike Robinson and Ben Health.

There were honours for Aldi on the night too, whose innovative range of game products earned them the title of Best Multiple Retailer, sponsored by British Game Assurance.

Simply outstanding venison pies saw The Wyre Pie Company take the title of Best Added Value Product or Innovation back to Tenbury Wells, with thanks to sponsors Beretta Gallery London for their support of the category.

Scotland’s Regional Moorland Groups proved hugely popular winners on the night, taking the award for Best Game Educator, sponsored by The Game Fair, off the back of their education programmes for school children and Game for Giving initiative.

Coming out on top in the category for the GunsOnPegs-sponsored Best Influencer was Billy Wyatt, who founded the Giving Up The Game group on Facebook, which has 24,000 members and counting.

Billy also took home the award for Champion of Champions, sponsored by BASC. First started in 2016, Giving Up The Game is an incredible source of information and encourages people to try game for the first time by sourcing it direct from shoots and stalkers.

For more information on all the winners, shortlisted nominees, and the Awards, visit the Eat Game website.