Tribute to the Duke of Edinburgh at the Scottish Game Fair 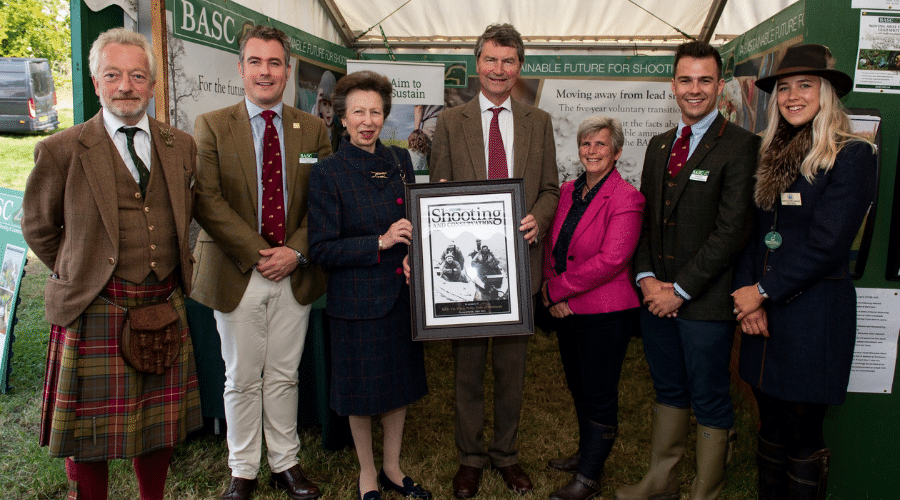 BASC has paid tribute to the His Royal Highness The Duke of Edinburgh at the Scottish Game Fair, following more than fifty years as patron to the UK’s largest shooting organisation.

On a visit to the Scottish Game Fair, Her Royal Highness The Princess Royal was presented with framed copy of May’s edition of Shooting and Conservation by BASC’s chairman, Eoghan Cameron.

The magazine’s front cover was dedicated to The Duke – a lifelong country sports enthusiast – and pictured him punt-gunning in The Wash on the east coast of England.

Prince Philip became the first royal patron of the Wildfowlers’ Association of Great Britain and Ireland (WAGBI) – later to become BASC – in 1968, the year of its diamond jubilee. He held the position until his death at the age of 99 on 9 April 2021.

During her visit to the BASC stand, The Princess Royal also spoke with BASC representatives about Aim to Sustain – the new partnership working to promote and protect game shooting. She also learned of a new deer vision for Scotland, which was unveiled by BASC and ten other organisations on Friday.

BASC’s chairman, Eoghan Cameron, said: “It was a great honour to have presented The Princess Royal with BASC’s unique tribute to her father, The Duke of Edinburgh.

“The Duke’s passion for the British countryside was a source of inspiration to many BASC members, and we were truly blessed to have him as our patron for more than fifty years. There was no better champion for the Association’s mission and values.

“We hope that this presentation to Her Royal Highness has highlighted how grateful we are for her father’s contribution, and how honoured we were to have him as our patron for so many years.”