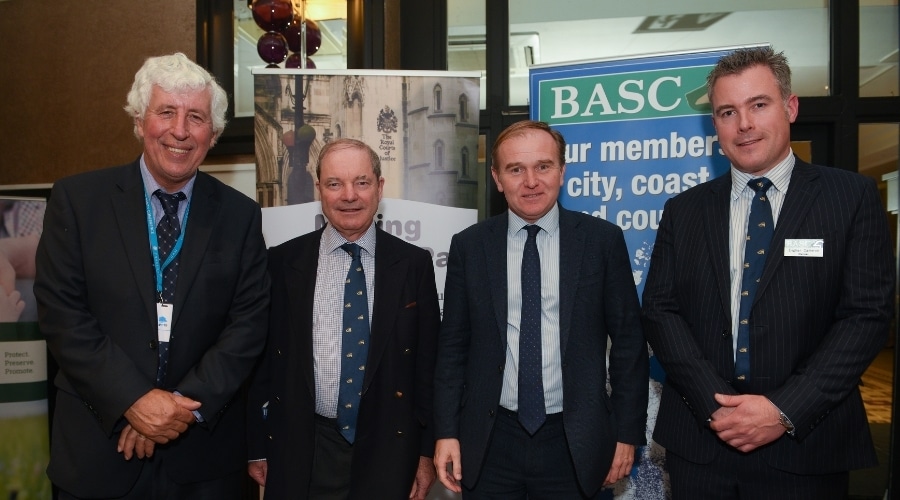 Environment Secretary George Eustice MP praised BASC for its role in protecting the British countryside during the Conservative Conference in Manchester.

Speaking at a rural reception hosted by BASC and the Angling Trust, Mr Eustice (pictured above alongside, from left: Martin Salter, Sir Geoffrey Clifton-Brown and Eoghan Cameron) highlighted the conservation that takes place as a direct result of shooting.

As the name implies, there is a very implicit connection between BASC and wildlife conservation,” he said.

“All of us need to look at how we make space for nature and I know that a lot of proactive work is done by BASC to protect the wildlife in our countryside.”

While discussing general licences and animal sentience, Mr Eustice also commented on the importance of securing a good evidence-base to support policy decisions.

“General licences, for example, have been a difficult issue for several years,” he added. “The challenge is that the emphasis has been on ambiguous assessment processes.

“We want to get to a position where there is less ambiguity, less litigation and less trundling through courts. We want all that to be replaced with evidence-based policy.”

The packed reception was also addressed by Sir Geoffrey Clifton-Brown, chair of the All Party Parliamentary Group for Shooting and Conservation, who said: “All those involved in shooting and fishing have had a tough time during Covid, so it’s good to be back and looking forward to the season ahead.

“Away from the field, there are some important issues around proposals for animal welfare legislation. We are concerned about the potential impact of these and we will be keeping a close eye on government.”

BASC chairman Eoghan Cameron highlighted the value of the shooting community to politicians.

“There are hundreds, if not thousands, of BASC members in every constituency, rural and urban, in the United Kingdom,” he said.

“Our members, as with many of those who live in the countryside or take part in country pursuits, tend not to like making a song and dance or drawing attention to themselves. So one might be forgiven for thinking at times perhaps that they aren’t there. But they are there, they are proud of who they are and what they do.

“They have strong views and they depend on us and those here today to speak up for them – they are part of a silent majority.

“That is why my association and our members are very much encouraged that the Conservative party is listening and understands that representing rural seats has much more to do with a managed, sustainable countryside than veganism and rewilding.”