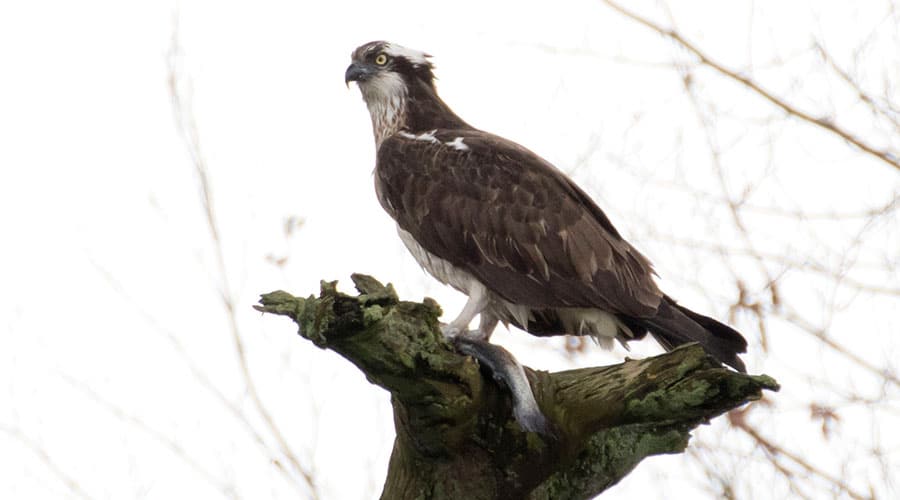 A nest camera has snapped the return of the first Lake District osprey, known as YC, as he returned from his West African wintering grounds.

YC’s arrival at the nest on a misty March morning marked the end of his epic migration, beating his arrival time last year by 12 hours.  The return of YC officially kicks off the osprey breeding season in the Lakes.

This is YC’s eighth year at the same breeding platform.  The site is one that BASC helps to look after with Natural England and so far YC has wasted no time in putting the finishing touches to his nest in preparation for his partner’s return. 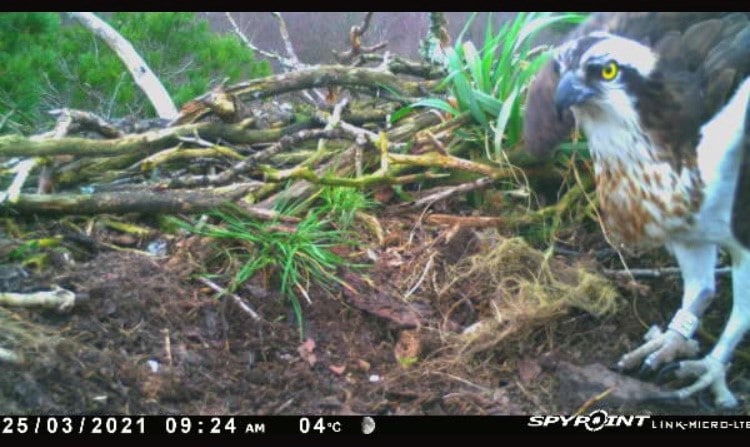 As part of the BASC Osprey Project, Mike Thornley, BASC’s northern regional officer, has been working hard in preparation for the ospreys’ return.

The Osprey Project monitors the local population, maintains the ospreys’ nesting sites and provides advice and assistance to local landowners.

This year, four new nesting platforms have been erected in Cumbria and two in North Yorkshire.  Added to the six currently in place, a total of 12 nesting sites will be monitored this breeding season.

Osprey chicks are also ringed as part of the Osprey Project which helps us to understand their movements, age and breeding success.

What impact is the BASC Osprey Project having?

Ospreys were extinct in the UK for much of the 20th Century. In recent years, their return to the Lake District has been part of a dedicated conservation effort by BASC, in collaboration with numerous other conservation bodies and landowners.

Numbers across the whole of the UK now stretch to 300 pairs.

The BASC Osprey Project is paid for by BASC legacy funding.

Find out more about BASC’s other conservation projects here.

YC: the story so far

2011: He returned to the area following a couple of years maturing in West Africa but was seen off, as is natural, by his parents.

2013: His first nesting attempt with his mate was made on a pylon in South Cumbria, this was a practice nest as building started in June. This nest collapsed during the winter of 2013 and the power company funded a new platform on the adjacent nature reserve.

A specially constructed nest platform was built in March 2014 by Mike Thornley, in time for their return from Africa in early April.

2014: YC returned in with his mate and the new platform was an instant hit, they successful raised two chicks.

2015: YC and his mate returned to the platform and produced three eggs but their breeding attempt failed.

YC mysteriously disappeared whilst his mate was incubating the eggs. With no partner to fish for her, she had no choice but to abandon them. There is no evidence to why YC left – a worrying year as we did not know if he was still alive.

2016: Great news when YC arrived on 30th March. He was seen on camera pestering a neighbouring couple, before returning to his own nest. He went on to have one chick.

2017: Another successful year producing one chick.

2018: BASC started the Osprey project and financed a camera to go on the nest site. YC arrived on 30th March and had a large brood of three chicks.

2019: Thanks to the BASC camera we witnessed YC arriving at the nest on 28th March. He went on to have a healthy brood of three chicks.

2020: To our amazement, YC arrived several days earlier than any of the previous years on 25th March at 5.54pm on the nest. He again had a healthy brood of three chicks.

YC has successfully produced a total of 13 chicks (nine males and four females) to date.

All this information results from the great work that ringing chicks gives us, it helps us understand their movements, age and breeding success.