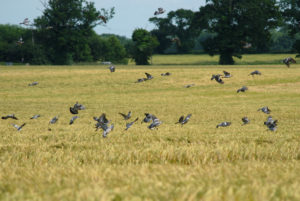 BASC has told Natural England the importance of woodpigeon control to the rural and farming community.

In a two-page document delivered today, BASC has highlighted the necessity of woodpigeon control ahead of the expected publication of the new general licence for controlling woodpigeon in England.

Natural England has said that the new licence is expected to go live before the end of the week.

Steve Bloomfield, BASC’s executive director of shooting and operations, said: “It’s important that Natural England realises the impact of woodpigeon on the rural and farming community and just how much damage they cause to crops and consequently people’s livelihoods.

“Woodpigeon have the ability to strip fields of crops and the knock-on effects are huge. The changes to the general licences have come at the worst possible time of the year for wildlife management, which is causing chaos and confusion across the country.”

There are over five million breeding pairs of woodpigeon across the UK and their population has increased by 134 percent between 1970 and 2011. BASC estimates that these bird pests cause £115 million damage to UK oilseed, brassica and pea crops annually.