What Scotland's programme of government means for shooting

Unveiling the programme for government

The programme provides a useful summary of what legislation the government intends to pass over the next year, as well as alluding to the longer-term ambitions of the administration.

The announcement was delayed on account of the recently finalised co-operation agreement with the Scottish Green Party, which will see two green MSPs enter government as ministers for the first time.

Lorna Slater – the newly elected green MSP for Lothian region – will now preside over green skills, the circular economy and biodiversity as part of her new government role.

Many of the policies agreed as part of the co-operation agreement are now, officially, government policy, and feature prominently in the programme.

The ambitions are diverse and wide ranging, with a plethora of policies designed to confront climate change and biodiversity loss.

Among them are measures that will impact on the countryside as we know it.

One of the foremost pieces of legislation we will see in the next year will be the ‘fox control bill’. It is described in the programme as follows.

The bill aims to address what have long-since been described by critics as ‘loopholes’ in the existing legislation, and looks to go further by potentially preventing trail hunting.

While we will have to wait to see the exact detail of the bill, it goes without saying that BASC will robustly challenge any attempt to limit a land manager’s ability to manage foxes where they are causing damage, or could cause damage.

We recognise the difficulties associated with managing foxes in certain habitats, and that flushing to guns with dogs is a useful management technique when other options are not viable.

Our representations will reflect this view, and we will also emphasise the importance of flexibility when it comes to controlling generalist predators which – if left unchecked – could cause significant damage to livestock and ground nesting birds.

There are a multitude of other commitments that centre on the theme of animal welfare, a selection of which can be found below.

We strongly welcome the updated livestock worrying legislation coming into force in November 2021, which will see tougher penalties given to offenders.

The definition of livestock has also been extended and will now include enclosed gamebirds. We worked with a number of gamekeepers to provide evidence of gamebird worrying, and submitted this when the bill was being scrutinised by parliament.

We will be carefully scrutinising proposals to phase out cages for gamebirds and laying hens, ensuring that the sustainability of shooting and the welfare of gamebirds are front and centre of our response to the forthcoming consultation. It is essential that everyone who rears gamebirds follows the Scottish government’s statutory code of practice for the welfare of gamebirds reared for sporting purposes, to ensure that game rearing is always carried out to a high welfare standard. 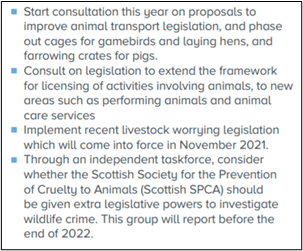 The first thing to note here is that there are no explicit timescales attached to these commitments, other than to have completed them before 2025. It is likely, however, that the judicial review brought by Trees for Life against NatureScot over the lethal control of beavers will have a bearing on proceedings.

If Trees for Life is successful with its challenge, it is likely that the Scottish government will move to review species licensing sooner rather than later. If they are not, the pace might be slower. It is worth noting, too, that NatureScot is currently reviewing individual licences for the control of wild birds, such as gulls and ravens.

When the review does take place and views are sought, we will robustly resist the principle of full cost recovery and the possibility of introducing a public register of licences. We have grave concerns surrounding the latter, not least because there could be obvious implications for the security and personal safety of named persons.

Perhaps the most unsurprising element of the programme for government relates to the licensing of grouse moors.

We await the opportunity to contribute our views to a consultation on this subject, but – similarly to species licensing – there is no explicit timescale attached to these intentions, other than to have them concluded before 2025.

Our response to this consultation will impress the importance of transparency and workability. We will strongly oppose any plans to impose undue bureaucracy on grouse moor managers, and will critically analyse any proposals with a view to ensuring that they pose no threat to rural communities. 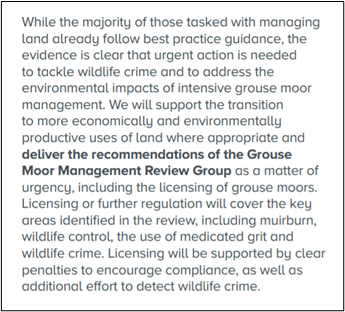 Another largely unsurprising element of the programme for government relates to deer management.

We have said previously that we agree with elements of the deer working group report. There are, however, a number of areas of concern – particularly with regards to the modification of deer close seasons.

Any changes which could be detrimental to the welfare of Scotland’s deer will be objected to, and it is this principle that will guide our response to the forthcoming consultation.

The direction of travel seems intent on making the management of deer easier for an unlucky few. But it is our firm and unwavering belief that there is a better way that involves integrating more people into the efforts to manage deer, while retaining the current provisions which protect deer welfare.

That is why we will be launching a new community integrated deer management initiative at the Scottish Game Fair, which sets out ways in which we can harness the considerable potential of trained recreational deer stalkers in Scotland. We can’t say much more on this at present, but it will without doubt constructively challenge the government’s current direction on this. 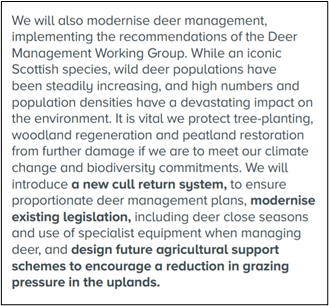 Overall, it is quite clear that we have a busy five years ahead with various potential changes across a diverse range of areas. We will strive to deliver a strong voice for BASC members as we navigate these challenges.

It is absolutely worth noting, however, that the next five years do represent an opportunity for us to proactively shape the future of shooting in Scotland. Our soon-to-be launched community integrated deer management initiative is a prime example of this proactive work, and we look forward to building on this over the course of the parliamentary term.

If you would like to get involved, we strongly recommend making your views on the programme for government known to your local MSP. We would also like to hear your thoughts, and you can email us by clicking here.