What a weekend at The Game Fair

The last few days saw tens of thousands of visitors engage with BASC at The Game Fair. Despite the unpredictable weather, staff were busy welcoming guests onto the seven different stands BASC ran.

Shortly after, the Marquess of Salisbury announced the Wildlife Habitat Trust’s (WHT) 2019 Wildlife Habitat Conservation stamp. The artwork featured a “Woodcock on the Stackpole Estate” by renowned wildlife artist Chris Lodge, who also offered visitors a chance to see him in action on the BASC main stand. The work undertaken by the WHT is of vast benefit to wildfowlers across the country. The stamps can be bought here.

​​In the Game Fair Theatre, BASC’s CEO Ian Bell joined Fieldsports channel Charlie Jacoby and Simon Gibson to discuss whether game shooting should contain a Deer Stalking Certificate-style qualification. The packed room was split in their opinion, but the vast majority welcomed the GWCT’s voluntary scheme ‘The Knowledge’.

If you're at Hatfield House today, head to @TheGameFair theatre at noon where Ian Bell is joining @charliejacoby of @fieldsportstv. pic.twitter.com/ZuMs3TnbOb

Launched today @TheGameFair. A whole year of raising funds and awareness for the @GWelfare. pic.twitter.com/WXdQXW1cEs

Later that afternoon at the Gunmakers Lounge, BASC alongside several other countryside organisations announced the Year of the Gamekeeper 2020 initiative. This is a 12-month campaign to help educate people on the role of the gamekeeper and raise valuable funds to ensure an increased presence of the incredibly important Gamekeepers Welfare Trust.

As the first day of the show drew to a close, BASC’s chairman Eoghan Cameron hosted a pop-up restaurant in the cookery theatre. This was a great opportunity for volunteers, members and other organisations to network whilst tasting delicious game canapes from top quality chefs.

Day two saw the weather take a turn for the wet and muddy. But this didn’t seem to stop the enthusiastic staff who welcomed visitors to the stand equipped with wellies and raincoats.

The morning saw the official launch of the Eastern region by new Regional Director Terry Behan. With over 20,000 members based in Eastern England, focus has gone into making sure they are given equal opportunities to regional events, training and support.

In the Game Fair Theatre BASC’s deputy director of communications and public affairs Garry Doolan, vice chair Claire Sadler, and influencer Al Gabriel held a debate on the use of social media in shooting.

At the front of the BASC main staff, deputy director of communications and public affairs Garry Doolan held an open discussion with British Game Alliance’s managing director Tom Adams on game meat. Tom commented on the great work that BASC do for schools through the Taste of Game initiative and highlighted the importance of this work on raising the profile of game meat to new audiences. 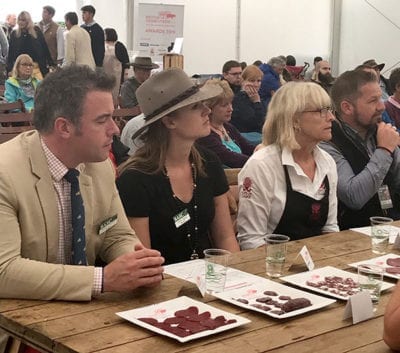 On Sunday, the mud continued to spread with bursts of rain sneaking through. BASC chairman Eoghan Cameron and vice chair Claire Sadler held a live Q&A in the Game Faire Theatre on ‘what has BASC ever done for me’. The session included many of the education projects run throughout the regions to promote shooting to the public, and the requirement to tackle threats to shooting head on.

Throughout the weekend there were plenty of opportunities for members and guests to learn about the work of BASC and have a go at shooting. These included a driven boar shooting simulator, target airgun line and clay pigeon lines. Other interactive activities included a colouring competition for children, print your own bag with the conservation team and head measuring, amongst many other fun things. Members were also able to ask for advice on firearms, general licensing and much more.

As ever the Game Fair gives BASC the ability to host a number of meetings, from MPs such as Sir Geoffrey Clifton-Brown, to Natural England’s Chairman, Tony Juniper, and the Raptor Persecution Priority Delivery Group Chair, Nick Lyall. All meetings were productive and showcased the asset that is the Game Fair.