I would like to tell you about a hobby of mine that not many people know I have – pheasant shooting.

I went shooting for the first time when I was eight. My grandad inspired me to do it and now we go shooting together once a fortnight on a Saturday during the season.

Before I started shooting, there were a few things I needed to learn though.

The first thing I had to learn was gun safety. I had lessons with a professional coach and my grandad gave me a few useful tips too. I had to learn how to use a gun safely and responsibly, work on my accuracy and gun mount. These were all essential before I could start using a shotgun on the shoot.

Before I finally got to shoot quarry, I did a couple of years beating (where you follow a trail with other people in a line and flush the birds). I enjoyed this a lot.

I shoot at the Stang Forest in Arkengarthdale. On a shoot day, everybody meets at a nearby farm café Mainsgill for breakfast. After food, we head down the road in our checked shirts, ties and neoprene boots in a convoy for five minutes.

We then gear up with wellies or boots and put the guns and cartridge bags in the back of a trailer, which is towed by a 4×4 and which will take us to where we’ll shoot. Before we head out for the first drive, we split into two groups and pick a card with a number on it. The number decides your peg, which is the position you shoot from. After each drive you move up two or three pegs.

The reason for splitting into two groups is so that one group can shoot while the other joins our permanent beaters to help them drive the birds towards the Guns.

My first gun was a 28-bore Berretta. Now, I have a 20-bore Berretta, which is a little larger. I actually shot my first woodcock with it. A woodcock is a small, fast bird, which is hard to shoot.

After the drive, the beaters and their dogs find the shot birds and hang them in a game cart to cool down. After our second drive, we have a break to chat, have a drink and some food. Then, at dinner time, we take the birds to where our cars are parked and have a 15-minute dinner break.

At the end of the day, we put all of our gear away and announce the winner of the cartridge count. We count how many cartridges were shot over the day, which is easily done as we put cartridges in a bucket after each drive. The person who guesses the closest number wins the money from bets.

At the end of the day, we all collect a couple of brace of pheasant and go off to the pub and have some chips and a beer…or Coca-Cola in my case! 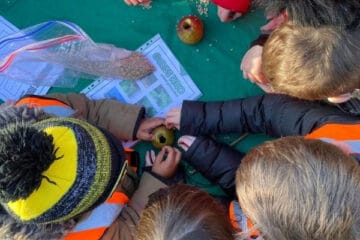 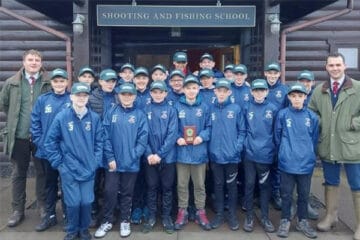