The dos and don'ts of doe season 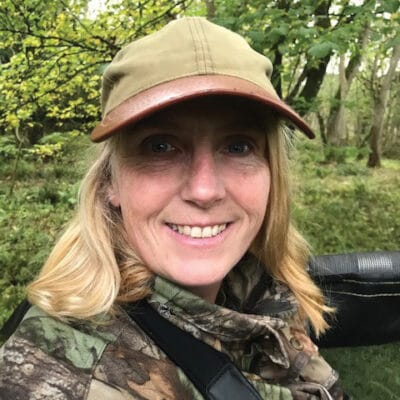 A highly experienced deer stalker, Audrey has been at BASC for 10 years, working as one of our deer officers last four years.

With the excitement of the rut having passed and the days starting to shorten, stalkers and deer managers start to turn their attention to the female season, says Audrey Watson…

The breeding half of the species

Some people love buck stalking and, agreed, doe or hind stalking can be cold and wet but it does mean that you don’t have to get out of bed so early. It also allows you to be back in time for dinner in the evenings!

With the summer gone, the cover is down and you can see so much more when you are out, making the job that bit easier.

In truth, we should always be thinking about controlling female numbers, as they’re the breeding half of the population. As such, stalkers should be using the time to note where does/hinds are while out in search of their male counterparts.

This is especially so with roe, as they will be there come the start of the doe season. Actually, I say that, but I’m convinced that deer all have calendars and know exactly when their season begins as you always see males in the female season and vice versa!

Noting whether they have young at foot also gives an indication of annual growth in the population and whether your cull plan needs to be adjusted accordingly.

For herding species such as fallow and red, its less easy to know whether females will be around. However, in one of my fallow woods, I can more or less guarantee there will be a doe and her kid in one corner of that piece of forestry as the females seem to return to the same area to have their young through the generations.

In England, Wales and NI, male and female red, fallow and sika deer have an overlap in open seasons. The winter months are where we really need to think about which animals we take and try to put a real emphasis on hitting that oh-so important female cull.

This isn’t always easy, as anyone who has spent any time stalking fallow will know! Quite often, the first deer that steps its way into view will be a male. If you only take one thing away from this blog, its to try and keep in mind that there may well be a female about to follow it so don’t just set your scope on the first deer you see.

After all, shooting a male deer will have very little impact on the population as a whole. However, taking females removes all future potential young she would have had. This is key to maintaining healthy populations.

In anything pertaining to deer management, we should be working to a cull plan. Within this, you’d generally aim to reduce the population by about a third to maintain population levels; more if you’re doing a reduction cull.

Proportion-wise, the ideal cull plan should comprise a minumum of 50% females across of any of the deer species.

We are often asked whether, when you see a female with young, should you shoot the doe first or her offspring? Some will say that, if you shoot the doe/hind, then her young will hang around and then you can shoot that, too. That is fine in the ideal world but wildlife does not read the manual and, often, and especially with the herding species, the calf or kid may well run off and you never catch up with it again. This is not a problem if it is no longer dependent on its mother but, if it is, you then have an orphaned baby deer. I’m sure I don’t need to go into detail about the welfare implications of this but suffice to say that an orphaned deer that was dependent on its mother will not survive for very long.

Generally speaking, most young deer will be independent from around Christmas time. This means that from then on, there is a far more solid reasoning in taking the adult deer first, knowing that if the young aren’t taken, they have good chances of survival and will be able to feed and care for themselves.

Obviously, the flipside of this is that before late December/January, you should aim to take the youngsters first, then the mature female.

One issue that is raised in this is how we can accurately sex a young deer? After all, the seasons apply to all deer regardless of age, contrary to the commonly held belief that until a deer is one year old it essentially has no gender and can be taken at will. While this isn’t the case, the legislation covering wild deer in the UK allows for young, dependent deer to be taken out of season for welfare reasons, namely if they have recently been deprived, or are about to be deprived, of their mothers.

Be sure before taking your shot

Finally, you should always be absolutely sure what you are shooting at over the winter months.

Remember in particular that roe bucks drop their antlers in November and December and it is easy to think that, just because you cannot see antlers, it must be a doe. Have a good look, especially at the rear end, and make sure it is indeed a doe and not a buck.

Mistakes do happen, but you can mitigate these as far as possible by taking your time before taking the shot.

BASC’s stalking scheme in Hampshire is currently accepting bookings for the doe season. Click here to head to our dedicated page to find out more and to book.