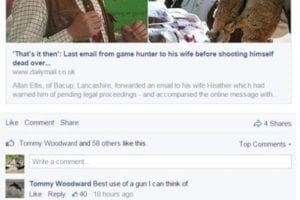 The UK’s largest shooting organisation, the British Association for Shooting and Conservation, (BASC) has called for the immediate resignation of an elected local councillor and animal rights extremist who posted comments on facebook mocking the suicide of a former soldier and game dealer. A further comment called for everyone who lawfully owns a gun and shoots live quarry to “kill themselves.” The comments were made by Thomas Woodward, an elected council member of Ryedale District Council and Pickering Town Council in North Yorkshire. Commenting on facebook on a news report on an inquest into the suicide of Allan Ellis from Bacup, Lancashire, Councillor Woodward said “Best use of a gun I can think of.” A second comment said: “If you choose to own a gun and kill for pleasure, then it’s best you kill yourself.” BASC’s chief executive Richard Ali said: “We are seeking the immediate resignation of this man from any elected office and a full apology to the family of Mr. Ellis for the distress he has caused. Mocking the suicide of anyone is absolutely unacceptable. Going further and stating that lawful gun owners should “kill themselves” is despicable behaviour. This man is not fit to hold a public office.” “In a register of financial and other interests Councillor Woodward has declared himself to be a member of the League Against Cruel Sports and the Hunt Saboteurs Association. BASC is calling for the League Against Cruel Sports to distance itself from these comments from one of its members and to confirm they are a breach of the values of the organisation.” BASC is contacting Ryedale District Council and Pickering Town Council to inform them of the facebook comments and to ask them to also publically distance themselves from Councillor Woodward’s comments and to take disciplinary action. BASC will also be contacting party group leaders on the council. The comments were published on a facebook page run by the Hunt Saboteurs Association and littered with sick comments such as “one scumbag less”, “he deserved it” “he did the right thing” and “a true coward till the end”. Richard Ali said “We know from past actions that animal rights extremists will stop at nothing in their misguided hatred of anyone involved in lawful shooting activities. These facebook comments and attacks show their true colours and will be roundly condemned.” ENDS For more information please call the BASC press office on 01244 573052