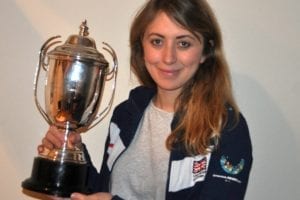 BASC’s Geri Buckley has been become British Air Pistol Champion 2015. Geri, who is BASC England’s North East regional officer, beat off stiff competition at the British Airgun Championships at Bisley. International pistol shooter Geri, won the Ladies (over 21) Air Pistol category in the National Small-bore Rifle Association’s competition. She said: “British Champion is a great title to have under my belt, especially leading into the European Championships next week. I’ve won the British junior championships several times and getting a senior title has been a big personal goal. Whatever your world ranking, being national champion is an unbeatable feeling.” Geri is the British record holder in the 25m Sport Pistol final. She is also a keen game shot and rough shooter, who accompanied her father wildfowling from an early age. She was captain of her university rifle club.   For more information please call the BASC press office on 01244 573052 or email press@basc.org.uk