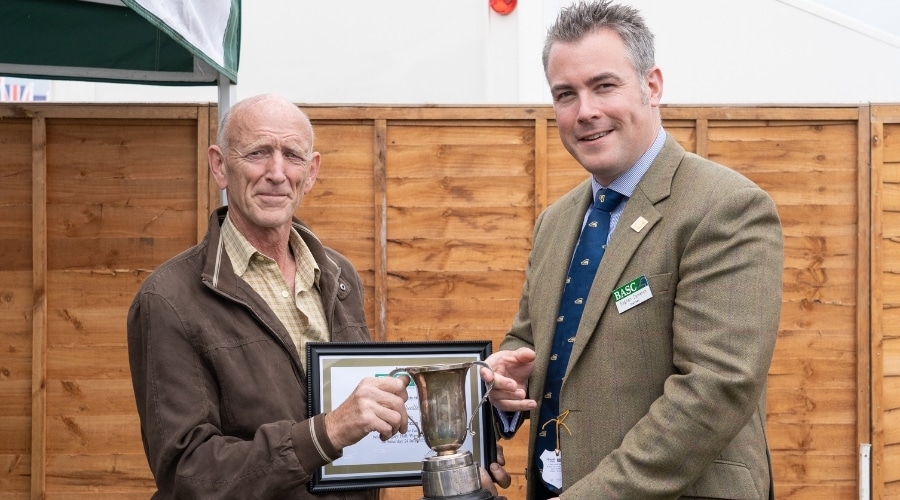 It was BASC’s equivalent of award season on day two of The Game Fair at Ragley Hall yesterday. Heading the line up was Steve Mueller, who received the Stanley Duncan Conservation Trophy for his work on grey squirrel control.

Working alongside our biodiversity team and BASC Wales, in addition to the Animal Plant Health Agency (APHA), Steve is a stalwart volunteer for BASC. His support and practical assistance with the project, which is currently working to develop a contraceptive for grey squirrels, has been integral to its success thus far.

Steve, pictured above, received his trophy from BASC chairman Eoghan Cameron during a presentation earlier today.

Taking centre stage yesterday too were the recipients of BASC’s Special Presentation Awards. These were as follows:

An active BASC volunteer for more than 30 years, Robert is a qualified BASC shotgun coach and assessor. He is an integral part of the shotgun coach training programmes and has assisted with course-creation and mentoring of candidates.

Stand-out supporters of the BASC gundog programme, Adrian and Caroline are regulars at Crufts where they deliver gundog displays across the BASC rings. Through their passion, enthusiasm and affinity with their dogs, Ian and Caroline capture the imagination of the public at Crufts and are key in raising the profile of BASC in the process.

Susan has been club secretary of the South Hants Wildfowlers Association for 20 years. Managing everything from logistics to memberships, Susan is the linchpin of the organisation. It is widely agreed that the association would not be able to operate at the level it does without her.

Vice chairman of the Gloucester Wildfowlers Conservation Association (GWCA), Ian is a long-term supporter of BASC. He has been involved in a number of Young Shots days and volunteers on behalf of BASC at shows across the South West of England.

The following individuals were presented with Honorary Life Memberships by Eoghan Cameron for their services to wildfowling:

The Tower Bird Trophies are awarded to the winners of a points league for field trials across the UK. Yesterday saw the delayed presentation of trophies for the 2019/20 season, given to the successful gundog handlers across different sections.

If you would like to find out more about how to register for the Tower Bird Trophies league, contact our gundogs team here.