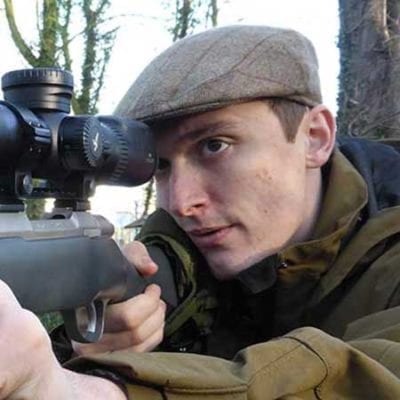 James Sutcliffe is BASC’s deer officer. He has over 10 years’ experience of recreational and professional deer stalking and gamekeeping. He has spent time guiding in New Zealand and managing wild boar and red stags in Germany. James is a keen rifle and shotgun shooter who enjoys working his Labradors throughout the game shooting season.

The coming weeks will see the countryside alive with new life, from birds to deer and new livestock. Whilst it’s wonderful to see, we need to make sure that our interactions with young wildlife are limited, as deer officer James Sutcliffe explains.

I recall in my teenage years; I did some work experience for a small deer park. Amongst the many tasks to do on my rounds, one was keeping an eye out for, and logging on a map any newborn deer I found whilst on my treks. Not only did this give an idea of the recruitment in population for the coming year, but it allowed us to highlight particularly busy areas for deer births. In doing so, we could adequately signpost and patrol these areas to make sure that members of the public and their dogs weren’t interfering with the young calves.

It was at this point that I realised just how much the wider, mostly uneducated public don’t understand how the natural world works. Sadly, these days, a lot of people’s first instincts if lucky enough to come across a very young deer will be to pick it up and take a selfie with it, after all I’m sure cute spotty fawns would result in many likes or follows on social media…

Why is this a bad thing?

Well, there are several reasons. Firstly, I can’t quite fathom the fear and stress that the deer go through when being plucked into the air by some big, unknown creature.

Walt Disney has a lot to answer for with his portrayals of wildlife and humans dancing and singing together! In reality, to that baby deer, you are no different than a wolf, an eagle or any other animal. You are a potential predator and therefore a threat.

There is the old argument that if you touch a young deer, your scent will cause the mother to abandon it.  I’m not sure of the accuracy of that claim but why take the chance?

Aside from those seeking their five minutes of Instagram fame, I have come across many people who think they are doing the right thing by picking up or interfering with young deer.

To their mind, deer should run away when approached, and the fact that this young one stayed lying down means there must be something wrong with it, so they need to act.

In reality, staying laid down and very still is just about the only defence mechanism that a young deer has. It is perfectly normal for them to hunker down and hope you haven’t seen them.

The other argument I have heard is that “its mother was nowhere to be seen, she must have abandoned it, that’s why we picked it up and took it to the vets/RSPCA”.

Once again, it is a perfectly normal occurrence for an adult female deer to leave her young hidden away for a few days or even weeks. They come back to them to nurse them, but their instincts are to keep away for the most part during this very vulnerable stage of the young’s life.

I have read that this is to limit the attention a potential predator might give them when near the young. This makes sense, going back thousands of years if a wolf doesn’t see the adult with the fawn, it would have a far harder time finding the young one on its own.

Picking up and moving a young deer may have some pretty unpleasant consequences. If you move it too far, the mother may well not be able to find it. This leads to a miserable death by starvation.

Helping a muntjac could result in euthanasia

Let’s think wider outside of the box for a moment. Let’s presume you are walking and are lucky enough to come across a very young muntjac. You don’t see an adult anywhere so conclude it must have been abandoned and decide it would be best to take the deer to some form of animal rescue charity or veterinary body.

Since 2019, Muntjac have been classed as Invasive Alien Species, and as such it is illegal for them to be released into the wild. This would mean that the animal charity/vets would have no legal option but to euthanise the fawn. Hardly a fair or fitting end.

So that’s just a few reasons why you shouldn’t pick up, move, relocate or interfere with baby deer. The list could go on and on, but to save some time let’s just summarize with “leave them alone”.

Keep your dogs away too

Having thought about people, lets now look at their best friends…. I adore dogs and can’t imagine life without them. Having attended the BASC classes at Crufts and seen/chatted to some of the people at that show, I know that some people take their love for dogs very seriously.

Regardless of how much we think of them, dogs do have the capability and potential to do some pretty serious damage. I’m sure we have all heard stories of dogs chasing and killing sheep, poultry and other livestock. Well, this can, and does, happen with wildlife as well.

I’ve already touched on that springtime fills the countryside with small, cute, and cuddly creatures. Well, these are equally interesting (and easier to find) to a dog. Even if a dog just approaches and sniffs at a baby deer, the stress levels must be through the roof!

Now factor in that many dogs owned by Joe Public are nowhere near as well trained as the working dogs we use. I’m sure we have all seen the video of the now infamous “Fenton” chasing a huge herd of red deer round a park….

So, what’s the solution for this? Well, it would be all too simple to say that dogs should have a basic level of training that means they can be stopped and recalled in any situation. However, this is something that would go way over the heads of many walkers and visitors to the countryside who seem to delight in watching their dog chase about the fields having a wonderful time.

I think a basic thing that we all should do is to keep our dogs on leads if there is a chance of something vulnerable being in the vicinity. I am very confident that my lab will walk to heel and not deviate unless instructed. But even with that trust, I will put him on a lead near sheep with lambs (and the dog in question is terrified of sheep!!). It’s not a question of how well behaved or well-trained your dog is, it’s just a sign of a bit of respect for wildlife or a farmer’s precious livestock.

So, there we have it, a lot of words to arrive at some very short conclusions. Leave young wildlife alone and keep your dog on a lead!

Click here to find out more about deer management