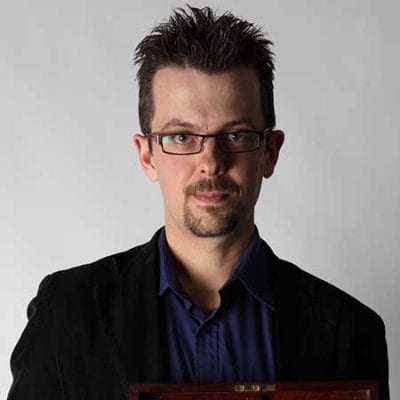 Keeper of firearms and artillery at the Royal Armouries Museum. Jonathan is responsible for curating a collection spanning the full history of firearms, from the handguns of medieval times to the latest modular assault rifle designs. His research interests include the use and effect of firearms and the history of British military small arms. He has published various articles including Trusty Bess: the Definitive Origins and History of the term ‘Brown Bess’ (2017), the book The Mauser ‘Broomhandle’ Pistol (2017), and has an author contribution to The Right to Bear Arms: Historical Perspectives and the Debate on the Second Amendment (2018). 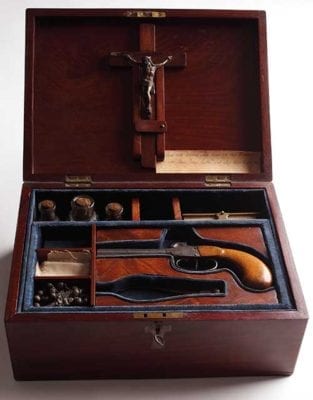 As a seasonal special, Royal Armouries’ Keeper of Firearms Jonathan Ferguson writes about one of the museum’s unique items, a Vampire Killing Kit.

The Kit was acquired by the museum in 2012 and includes:

Vampires have been a staple of popular culture for two centuries, from the publication of Polidori’s The Vampyre in 1819 and Stoker’s classic Dracula in 1897, to the many movies and video games produced in the 20th and 21st centuries.

The belief in real vampires is of course far older and even persists to the present day. As recently as 2004, a Romanian family exhumed the body of a relative, cut out his heart with scythe and pitchfork, and burned it. This was a continuation of folklore that existed elsewhere in Eastern Europe for centuries.

When the Habsburg Empire invaded Serbia in 1718, it encountered these strange superstitions and spread news of them, providing the demand for vampire entertainment and literature in Western Europe.

The business of killing vampires was deadly serious, and historical accounts emphasised the need for particular methods and tools. Historically, iron implements like knives, nails, skewers, ploughshares and scythes could be used to ‘stake’ the body or to remove the heart. The wooden stake through the heart was perhaps borrowed from fictional interpretations.

In 1986 an unusual cased pistol was offered for sale in the United States as an ‘anti-vampire kit’ of the 19th century. It contained a percussion pocket pistol with accessories, a combined cross and stake in wood and ivory, and two silver bullets. A dog-eared label in the lid attributed this fascinating object to a Professor Blomberg and the gunmaker Nicholas Plomdeur of Liège.

A series of kits came to light in the years that followed, and values began to climb as the big auction houses got involved and speculated on their likely provenance. The consensus reached was that they were expensive novelties for enlightened western travellers to Eastern Europe. This seemed plausible enough, especially as real vampire killers were not wealthy and did not use expensive weapons. 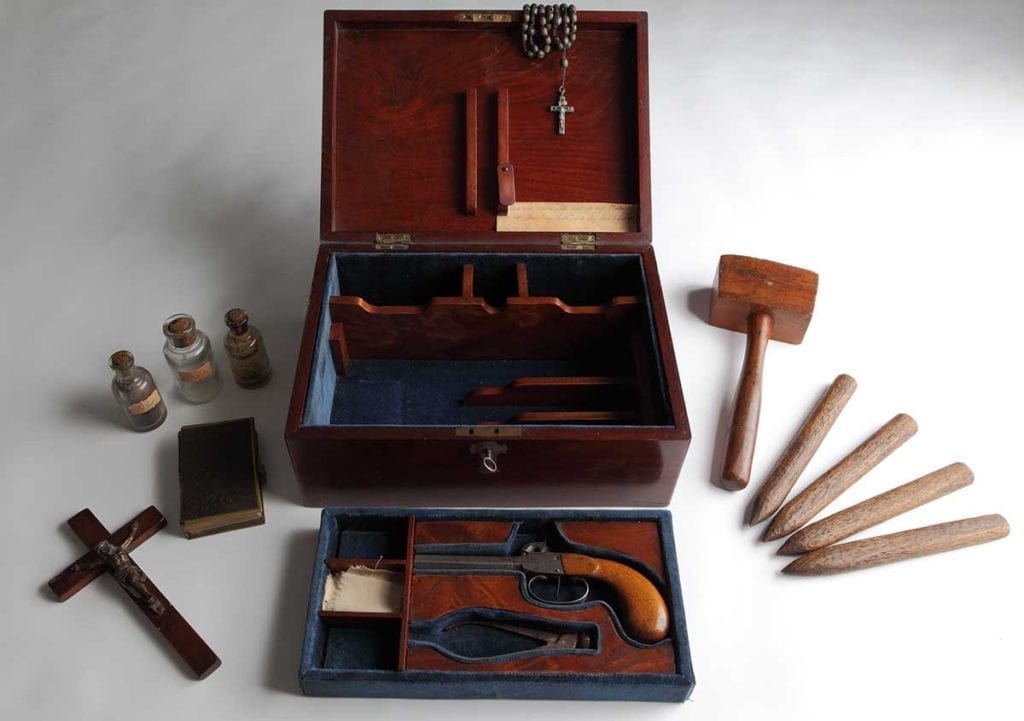 The meaning behind the silver bullet

Many people today are familiar with the idea of silver bullets being used to kill vampires, but a generation ago this was not widely understood. Silver shot was used or recommended against various supernatural creatures over the centuries (famously including the werewolf), but there is no association with vampires until 1928 when rogue priest and self-styled vampire hunter Montagu Summers’ penned his notoriously unreliable The Vampire: His Kith and Kin.

This is likely to have been a confusion with werewolf folklore – Bram Stoker certainly conflated the two beings in his seminal Dracula thanks to his limited familiarity with vampire folklore. Although the 1959 Universal film Curse of the Undead does feature a vampire being staked with silver, a silver bullet was not used in fiction until Peter Cushing melted down a silver cross in Hammer’s Satanic Rites of Dracula (1974) and moulded it into a bullet.

The basis in folklore is lacking, however. It’s not until the late 20th century that we find a reference to a quartered silver coin fired from a shotgun. Around the same time John Steakley’s novel Vampire$ started a new trend for silver-loaded pistols which translated into the movies, and the rest is history.

Is this a real kit…?

To answer this question, I completed a thorough survey of vampire slaying in both folklore and fiction. In the process it became clear that kits like our one could not have existed until the era of Hammer horror films in the 1950s–70s. Our kit is inspired by the movies, not Victorian stories and folklore.

This may come as a disappointment to some, and one would think this would affect the trade in these kits, if they are increasingly known to be ‘fake’. Yet in reviewing sales, something curious becomes apparent. Even kits catalogued as pieces of art or whimsy command high prices.

We in the museum world recognise the importance of ‘contemporary collecting’; after all, art galleries have been doing it for centuries. At the Royal Armouries we also collect modern pieces, including those made for stage and screen, often to the same standards as medieval originals.

We also collect the weird and unusual. The vampire kits clearly fall into this category. However, I maintain that they are valid pieces of material culture in their own right. With no other physical means of representing the historical conflict between people and imaginary creatures like vampires, these manufactured substitutes, themselves a good generation or two old already, are a way to interpret that lost part of history.

It is fitting, therefore, that the Armouries should preserve this example for the nation. It remains an invented artefact that reflects our cultural obsession with the vampire and tells the story of the people that believed in, and tried to fight, our favourite monster.