Surveys and other research

Research projects may be conducted in-house, through specialist contractors, or in conjunction with other organisations.

Our recent projects and surveys include:

BASC has produced a new briefing note on grouse shooting and moorland management and sent it to a targeted group of MPs including ministers and those with moorland in their constituencies ahead of the start of the grouse shooting season on August 12th.

The personal value of shooting

The Personal Value of Shooting

Shooting plays an important part in improving social and personal wellbeing, bringing people together, keeping them active and helping them to spend more time outdoors in the countryside. This infographic summarises some of the latest research from BASC.

Grouse shooting and management in the United Kingdom: its value and role in the provision of ecosystem services.

BASC white paper – Grouse shooting and management in the United Kingdom: its value and role in the provision of ecosystem services. This white paper looks at the positive conservation and socioeconomic contributions produced by grouse shooting and their role in supporting and improving the delivery of upland ecosystem services. It recommends support for the positive contribution grouse moor management makes to sustainably maintaining and improving upland ecosystem service provision, that stakeholders work together and engage in constructive dialogue, and that a joined-up approach be used by government, policymakers and public and private sectors to maximise benefits. It also warns of the dangers of unintended consequences to the balance of our moorland economies, ecosystems and communities from policy which is not evidence-based.

The Value of Shooting

Highlighting the economic, environmental and social benefits of shooting to the UK

The Value of Shooting report in PDF format 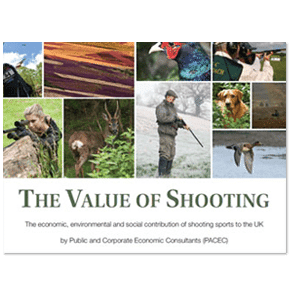 In the UK today…