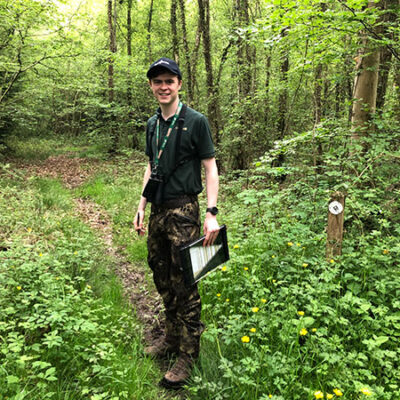 I have been involved with the field sports community since I could walk. I was one of the youngest in history to complete the DSC1 and DSC2 qualifications. I am a keen deer stalker, wildfowler, rough shooter, fly fisherman, spearfisherman and am heavily involved with grey squirrel management. When I have time I really enjoy working my young German Wirehaired Pointer called Beryl.

Hamish Profit discusses the woodland resilience project, how it helps to conserve red squirrels, and what other projects BASC has previously worked on to protect our precious reds…

What is the Woodland Resilience Project?

At the start of this year, BASC Wales secured funding to undertake a new and exciting project called Woodland Resilience Deer and Grey Squirrel Management.

The initiative is a shared outcomes partnership between National Resources Wales and BASC.

The aim of this project is to work out baseline numbers for deer and grey squirrels across Wales, which will aid the future management of these species.

We currently have five species of deer in Wales. These are roe and red deer (our two native species), fallow (while non-native, they are considered naturalised), and muntjac and sika deer (non-native species).

In total, the project areas cover more than 200,000 hectares of land throughout Wales.

The need for deer and grey squirrel control

The reason we need to control deer is because if their numbers get out of hand they can decimate our native woodlands.

An imbalance in the deer population can result in vast numbers of trees failing due to the deer stripping their bark and stopping natural regeneration of saplings coming through. Bark stripping takes away the cambium layer, where all the sugars are held and, in extreme cases, leading to the tree’s death.

Grey squirrel control is necessary as they are carriers of a disease known as the squirrel pox, somewhat similar to smallpox in humans.

The disease does not affect greys but is nearly 100% lethal if contracted by red squirrels.

When a red contracts the virus it creates scabs and lesions on its body, including the inside of its mouth. The mouth lesions prevent the squirrel from feeding and, in most cases, this leads to death from starvation.

For squirrel impact surveys we use the national forest technique. This method involves walking through the wood in a zig-zag fashion, stopping every 100 yards or so. We then pick five random trees to assess. The idea is to start from the base of the tree and scanning up the main stem and into the crown of the tree, looking for any sign of barks stripped by squirrels.

We normally undertake these surveys in the winter as it is easier to spot the freshly stripped bark when there are no leaves on the trees.

Freshly stripped bark is relatively easy to spot as it is a bright white/brown colour. The survey assessment included details of the size of the area that has been stripped and the age of the damage on the tree.

We are currently looking for areas of land to undertake these surveys in our project areas.

What projects have come before this?

My first assignment when joining BASC in 2018 was the Resilience for Natives Project, also funded by Natural Resources Wales.

The aim of this project was to control non-native invasive species such as the American mink and the grey squirrel in order to conserve threatened native species like the water vole and red squirrel.

The project was run in partnership with the Mid-Wales Red Squirrel Project which works around the Tywi Forest in mid-Wales.

BASC aimed to control grey squirrels within a 10km cordon around the outside of the Mid-Wales Red Squirrel Project area. We helped by assisting with thermal surveys for signs of red squirrel in the Clywedog Forest, where we successfully located a red squirrel drey.

We also helped to undertake red squirrel surveys in the forest, looking for feeding locations and potential dreys for future thermal surveys.

In 2019, we’ve helped on a project researching a possibility of using contraceptives for grey squirrel control. This was done in partnership with Animal Plant Health Agency, UK Squirrel Accord, Defra, and the Deer Initiative.

The project involved assessing the effectiveness of the delivery method for the contraceptive, as well as developing a method to survey grey squirrel using camera traps.

I liked to call this the ‘pink squirrel project’. This is because we’ve used a dye called Rhodamine B, which lights up as fluorescent pink under the UV light, to checked if the bait stations had worked successfully. Many of the squirrels who had eaten large amounts of dye showed up pink even without the need for us to switch on the UV lights!

We deployed 80 traps over two woodlands for 18 days. In the control woodland, 57 squirrels were caught and four of these tested positive for Rhodamine B. In the focus woodland, of the 76 squirrels removed, 71% were positive for the dye.

The Woodland Resilience Project follows on from these studies.

We are currently looking for volunteers to assist with the Woodland Resilience Project.

There is much to be done and we are looking for people who would be willing to undertake deer and grey squirrel impact assessment surveys.

We will also be delivering grey squirrel control courses to volunteers. We will charge £5 for the course but this is purely to pay for the certification process.