A helping hand for Tufty

Richard Saunders, a journalist and airgun shooter with over 30 years’ experience, explains how airgun shooters are spearheading a red squirrel reintroduction project in Cornwall.

Airguns are playing a critical role in an ambitious red squirrel reintroduction programme in the Lizard peninsula in Cornwall.

The privately funded Cornwall Red Squirrel Project (CRSP) was formed in 2009. The CRSP aims to re-establish the species some 34 years after the last recorded sighting in Cornwall.

Greys are here to stay - population control is essential

The project’s first mission was to reduce the number of grey squirrels to a level deemed safe to release red squirrels into the wild. The greys carry a pox virus that is harmless to them but fatal to their red cousins.

CRSP had culled around 4,000 greys by 2018 and the task to reduce the grey squirrel population was entrusted to a team of rangers. They all approached the challenge with a combination of trapping and shooting techniques.

Ahead of the release, they are working with David Woolcock of Paradise Park to breed a healthy stock of red squirrels in Cornwall. Currently, the project has three separate breeding sites: Paradise Park in Hayle, Trelowarren, with multiple enclosures, and Trewithen.

“The Victorians brought squirrels into the country in 1876,” says CRSP squirrel ranger, Ian Hampton. “They weren’t to know the long-lasting damage they would cause. In addition to the pox infection, grey squirrels damage trees by stripping bark, dig up bulbs and predate on songbird eggs and chicks.”

Ian and his fellow rangers acknowledge they will never completely eradicate grey squirrels. However, they know that reducing their number will lessen the risk of the pox spreading to red squirrels once reintroduced. Reduced population of greys will also help improve the broader woodland ecology.

The rangers report the GPS location, weight, length and sex of each squirrel they kill. They also keep notes on whether female squirrels are pregnant or lactating. The information is then analysed by the Game and Wildlife Conservation Trust. This helps to create an accurate picture of the size and make up of the remaining grey squirrel population. 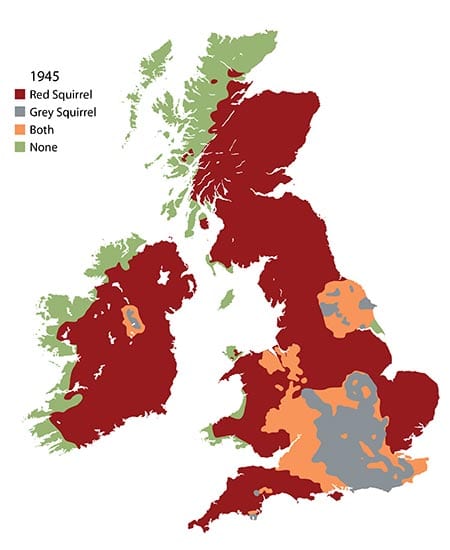 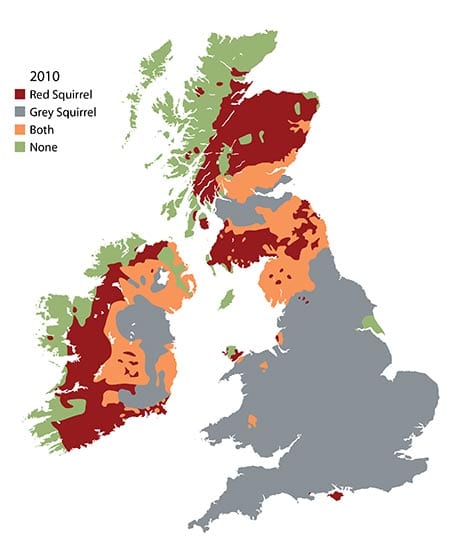 As long as they are checked daily, the traps work 24 hours a day, 365 days a year. There’s a limit to how long I can be in the field with my rifle though,” Ian explains. “But the truth is that trapping or shooting alone would not be anywhere near as effective. Our success is based on using both tactics in parallel.”

The importance of airguns to the CRSP is recognised by manufacturer Brocock. They donate air rifles, scopes and range finders to the rangers. Ian and his team currently use two 30 ft/lb FAC rated air rifles a Bantam and a Compatto in .22 calibre, and a sub 12 ft/lb Compatto in .177. All of them are paired with MTC Viper Pro scopes.

“My Bantam has had a hard life, with plenty of knocks and scrapes to show for it, but it always delivers the goods,” says Ian, patting the stock of his air rifle. “The extra power of the FAC version helps, of course, but you still have to put the pellet in the right place to kill humanely. I only take head shots and rarely, if ever, shoot at more than 30 yards.” 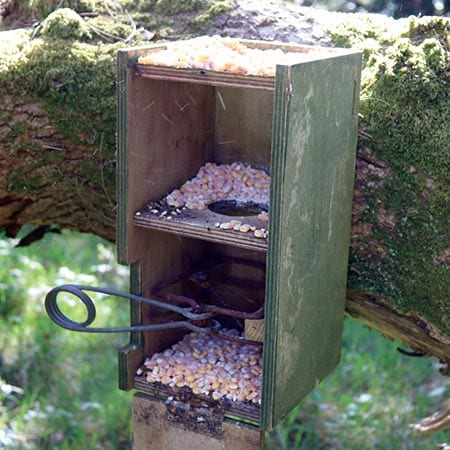 As the number of grey squirrels decreases, opportunities to shoot those left are increasingly few and far between. Ian’s tactic is to set up his traps and feeders, which he baits with maize, in pairs. By locating traps in semi-covered positions within range of his feeders, he can rest on them to take shots. He has also designed each feeder with a metal backstop. Ian also makes sure there is plenty of back cover to reduce the potential harm caused by ricochets or missed shots.

When he first started working for the CRSP three years ago, Ian would average 30 or 40 squirrels a week. Today, as a result of his success, he is lucky to get five or six. He is noticed a dramatic change in the woodland environment too.

“I used to take my iPod because there was nothing to listen to. Today, with fewer squirrels, the woods are alive with bird song again,” he says.

Ian goes on to explain that greys tolerate high levels of tannins. Because of that they are able to eat seeds, berries and nuts before they are ripe. This denies important food sources to other woodland animals.

“Take dormice for example,” he says. “They feed on hazel nuts. But they don’t get a look-in with so many squirrels around. I’m certain that the decline in the number of dormice is related to the increase in squirrels. It will be interesting see if their numbers grow now.”

Getting ready for the next step

Despite having reduced the number of grey squirrels significantly, the rangers’ work is more important than ever. This fact is not lost on Sir Ferrers Vyvyan, a trustee of the CRSP.

“We’re on the cusp of red squirrel reintroduction to Cornwall for the first time in 34 years. We simply cannot afford to be complacent and allow greys to re-establish themselves and potentially undo everything we have achieved,” he says.

In fact, the CRSP is considering plans to recruit airgunners to help in the ongoing monitoring and control of grey squirrels. It is looking to run a certified and accredited course on grey squirrel control and broader airgun shooting skills. This would provide airgunners with the sort of expertise and credibility that would help them be more successful in securing their own permissions.

“Once we are up and running, I believe we can work with airgunners to set up a programme whereby having completed our training course and achieved certification, they can partner with our rangers to manage traps and feeders for evidence of grey squirrels and deal with them accordingly,” says Sir Ferrers. “Without doubt, the airgunning community could be a vital part of the long-term success of the project.”

You can read more about the red squirrel reintroduction project on their website where you can find updates and contact information if you would like to get involved.