Greenland white-fronted geese have arrived back at the Dyfi estuary, their main wintering ground in Wales.  Local wildfowlers first spotted the geese on the estuary on the 25th October. Since the 1970s wildfowling clubs on the estuary have been protecting the geese with an effective voluntary moratorium on shooting. This conservation measure pre-dates national and European designations on the Dyfi estuary and is used as a showcase example at an international level.

Following a three month public consultation earlier this year, Alun Davies, Minister for Natural Resources and Food, announced his support for the continuation of a voluntary moratorium on the shooting of Greenland white-fronted geese in Wales.

Effective conservation measures need to engage and inspire local people to make a difference in their area. BASC welcomes the minister’s decision, his policy team and the Welsh Government for acknowledging the effectiveness of the voluntary measures being observed by wildfowlers on estuaries across West and North Wales. Local wildfowlers took the lead on awareness raising, partnership working and conservation measures in the 1970s. The recent consultation has helped reinvigorate wider interest in these precious birds. Local wildfowlers are once again taking the initiative, by bringing together local farmers, members of the Dyfi Wildfowl Management Advisory Panel and representatives of BASC, the Welsh Government, Natural Resources Wales and the RSPB on practical measures that will help the geese.

Habitat improvements on the Dyfi will help ensure that the birds start their journey back to Greenland in peak condition.  This is vital because the key factor determining the global population of Greenland white-fronted geese is breeding productivity in Western Greenland and pressure on these habitats. Competition with Canada geese and late thaws in nesting areas are believed to be the main causes of fluctuations in productivity.

The Greenland White-fronted Goose Study, an independent organisation dedicated to the study and conservation of these geese has recently joined Facebook. The webpage is a great way of learning more about the birds and you can help by using the page to share your sightings. The Wildfowlers Association of Great Britain and Ireland (WAGBI) was a principal funder of the first British expedition to Greenland in 1979 to study the Greenland white-fronted goose.

This lead to a second expedition in 1980 and many more have followed.

BASC has a long involvement in the conservation and legislative protection of migratory birds. BASC was involved in the establishment of the Africa-Eurasian Waterbird Agreement (AEWA) in the 1990s, and is active in the AEWA Technical Committee and working groups for single species action and management plans.  BASC is a signatory to the 2012 AEWA single-species action plan for the conservation of Greenland white-fronted geese. 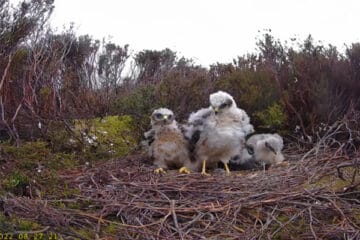 Funded by BASC's Wildlife Habitat Charitable Trust, the camera is streaming live footage from a hen harrier nest on the Swinton Estate.