Earlier this year NRW held a wild bird review, consulting on their proposals for the shooting and trapping of wild birds and the destruction of eggs and nests under general and specific licences in Wales. BASC submitted a comprehensive response to the consultation, outlining a number of concerns regarding the proposals.

Given the scale of the response to the consultation NRW have taken the decision to reissue the four general licences which authorise lethal control (GL001, GL002, GL004 and GL005) unchanged from 1 January to the 30 June 2022.

Steve Griffiths, BASC Wales Director commented “Given that these general licences were due to expire on 31 December 2021 we are pleased that NRW has taken this decision as it helps provide some clarity for general licence users. BASC have been clear and consistent in our ask for a workable licensing system that is based on evidence and we continue to highlight this to decision makers.”

NRW are going to use this time to consider the best way forward in relation to the proposals outlined the consultation paper. They aim to publish the outcome of their review, including any changes to general licences, at least two months before the reissued general licences expire.

Please note that this does not apply to the renewal of NRWs other general licences which will be renewed for 12 months as normal. Applications for specific licences to control wild birds should also continue to be made as normal.

You may not kill or take rooks or collared doves under the Welsh general licences.

This general licence is for the purpose of preserving public health and preventing the spread of disease.

It authorises the killing or taking of feral pigeon. This includes damaging or destroying their nests and taking or destroying their eggs. It also authorises the use of any device for illuminating a target or any sighting device for night shooting; the use of any form of artificial lighting or any mirror or other dazzling device; or of any handheld or hand propelled net to take birds whilst not in flight.

This general licence is for the purpose of conserving wild birds.

The above control methods are authorised to conserve only the chicks and eggs of bird species listed in Annex 1 of the licence.

This general licence allows the killing or taking or destruction of the eggs of ruddy duck.

Information on other general licences and specific licences in Wales can be found here. 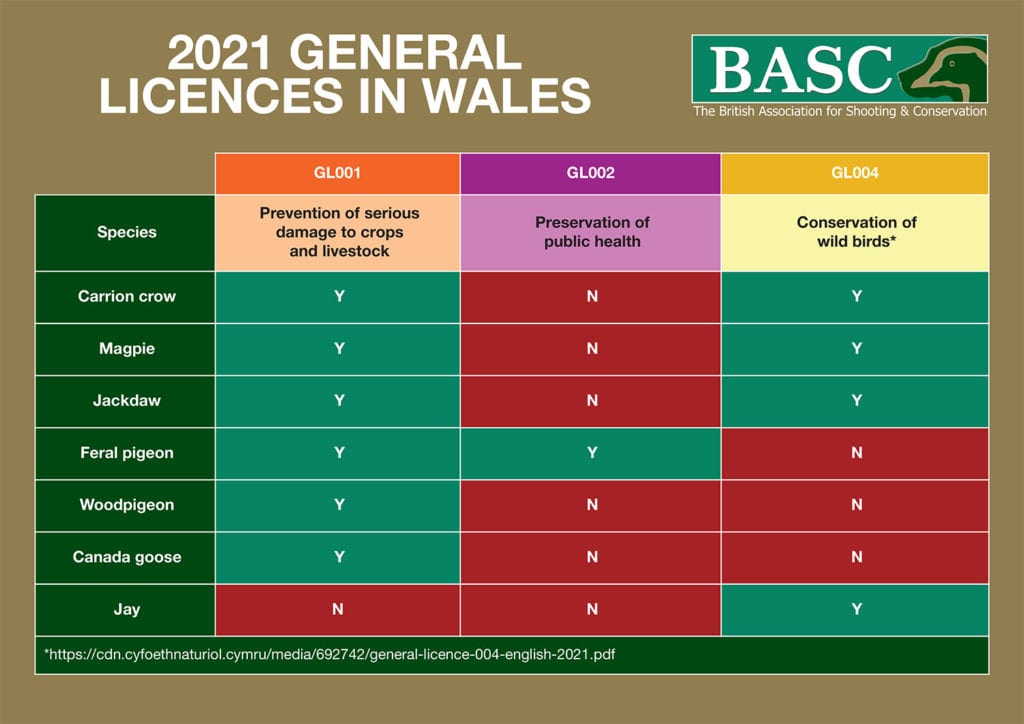 BASC Wales director thanked everyone who took the time to respond.

BASC hails High Court decision as a victory for the countryside

BASC will be providing a wide range of information to this review on behalf of members but it is vital that anyone who is able to provide evidence of their own does so.