With the pheasant season drawing ever closer, I decided to ask my friend, 18-year-old Mark Newham, a few questions about his farm syndicate shoot on which I was lucky enough to get a day’s shooting last season.

As well as helping on the family farm and campsite, Mark works as an apprentice agricultural engineer. One of his main hobbies is shooting and his pride and joy is his old Land Rover.

On their farm in Dalby Forest – an idyllic corner of North Yorkshire – Mark helps run the farm syndicate shoot alongside his dad James and mum Wendy. The shoot was set up by Mark’s grandad in 2001. They have 16 Guns which they split into two teams of eight. One team is run by Mark and the other by his dad.

Q: How do people join your farm shoot?

A: Mostly by word of mouth, but sometimes people are invited as guests and enjoy themselves so much they ask to join.

Q: What happens to the shot birds?

A: My family is very passionate about ‘eat what you shoot’ and we encourage everyone to take their birds home. If there are some left, my mum makes a pie for the next shoot’s lunch. No pheasant goes to waste.

Q: What advice do you have for someone else looking into starting a shoot?

A: Build up a reliable, hard-working syndicate, with people who are happy to get involved and aren’t afraid of getting their hands mucky. You need to set aside a lot of free time to work on the shoot – it can be a very time-consuming commitment. It is very important to learn to work with what you have before expanding with more birds and more land. Best to have a small shoot that runs well than a larger one with people complaining. You should also think about what style of shooting matches your land. For example, deep valleys would be ideal for high driven pheasants. Also, you need to know which fields are suitable for growing cover crops. Don’t be afraid to try new things, like moving feeders to new locations from time to time.

Q: What’s the hardest thing about running a farm shoot?

A: What puts a lot of people off starting their own shoot is the stress that comes with it. I find it very stressful worrying about making sure everyone enjoys their day. Seemingly simple things, like everyone getting a shot or the last drive being a success, can be a real worry.

Q: How does your family help?

A: The whole family must chip in and help on shoot days. In the morning, my mum goes and checks the pheasants’ water and that the hoppers have food. Meanwhile, my dad and I are dashing around doing last minute jobs to make sure the day goes smoothly.

Q: What are your future plans?

A: I would like to increase the number of birds we put down. I’d also one day like to take on some land with woodland, which makes for a really good drive. That’s something a lot of our Guns enjoy the most.

Q: What’s the best bit about running a shoot day?

A: Definitely seeing everyone go home with smiles on their faces at the end of the day. 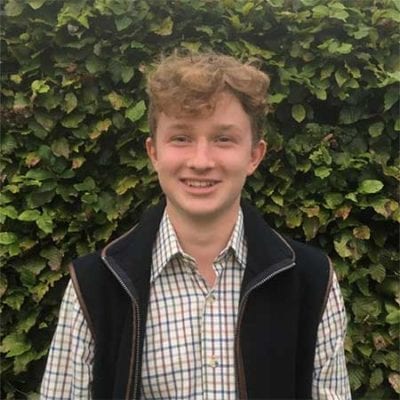 My name is Edward Lyon and I’m 17. I’m in my first year studying agriculture at Bishop Burton College in Yorkshire. In my spare time, if I’m not shooting, you can usually find me riding my horse or out on a tractor. My interest in shooting has been a natural progression from bagging the odd rabbit or pigeon on my grandparents’ farm. I then took part in a clay pigeon competition through my local Young Farmers’ Club and ended up qualifying for the national championships with an old 20-bore side-by-side gun. I just missed a placing and so was inspired to buy a 12-bore over-and-under and have joined a local clay shooting club to hone my skills. Over the last year or so, I’ve also developed a keen interest in game shooting after being invited as a guest by a couple of friends. I’m now keen to go beating and learn more about what goes on behind the scenes of a successful shoot. This will be my second year as a Young Shots Journalist, and I look forward to getting out and about with my gun as much as possible.
This website uses cookies to improve your experience. We'll assume you're ok with this, but you can opt-out if you wish. Cookie settingsAcceptRejectRead More
Privacy & Cookies Policy