Fallout from the Scottish Parliament

As the fall-out of the Scottish Parliament’s mountain hare decision is analysed today, there will be confusion aplenty. What is strikingly obvious, however, is that the decision to grant the mountain hare full protection was made without a full understanding of the reasons why.

This is a move that could be significantly detrimental to the long-term conservation status of the mountain hare.

The Green Party may celebrate for now. But those mountain hares that exist away from managed moorland are on the precipice of local extinction and will remain in that precarious position as far into the future as we can see. The Green Party have no answers for that.

It was a night of mixed emotions in the Scottish Parliament. The Green Party was successful in seeing the mountain hare afforded full legal protection and vicarious liability being added to offences involving traps and snares.

The silver lining is that their attempt to ban the working gundog exemption on tail docking was thrown out.

With an evening of interesting debate and some time to contemplate – what does it all mean?

Throughout the evening, there was an overall concern about the addition of amendments that were completely new to the Animals and Wildlife (Penalties, Protections and Powers) (Scotland) Bill and some which many felt were out with the scope of the Bill. Although the presiding officer stated that the amendments were acceptable, the feeling from around the chamber was that the Green Party had crossed a line.

Parliamentarians from the SNP, Conservatives and Lib Dems all criticised the failure to bring this issue forward at either Stage 1 or Stage 2 of the Bill; arguing that an issue of such conflict deserved proper scrutiny.

It was the opinion of many that the Green Party had purposefully added it at third hearing to skip the scrutiny. This point was made most clearly by SNP Stewart Stevenson.

This series of attacks continued as the Minister responsible, Mairi Gougeon, responded to the amendment. It was, therefore, surprising to hear of her – and the Government’s  – support of the amendment – while disagreeing with pretty much everything it stands for.

So what swung it? Was it the Green Party’s ability to pull the ear of the SNP as part of their deal in forming a majority to take forward key legislation? Or was it the 24,000 people that signed an e-petition in support for the amendment in the days preceding the vote? I doubt we will ever know. Either way, there is no science that says protecting mountain hares will help with their conservation.

What we do know is that the Government has yet to propose a time-scale for protection and that they are actively considering licensing options.

The mountain hare discussion still has a long way to go. But the Green Party has successfully managed to wrap the mountain hare in red tape, and the SNP’s support has driven another wedge between those on the ground and the decision makers.

The calamity is perfectly summed up by the BBC’s Kevin Keane: 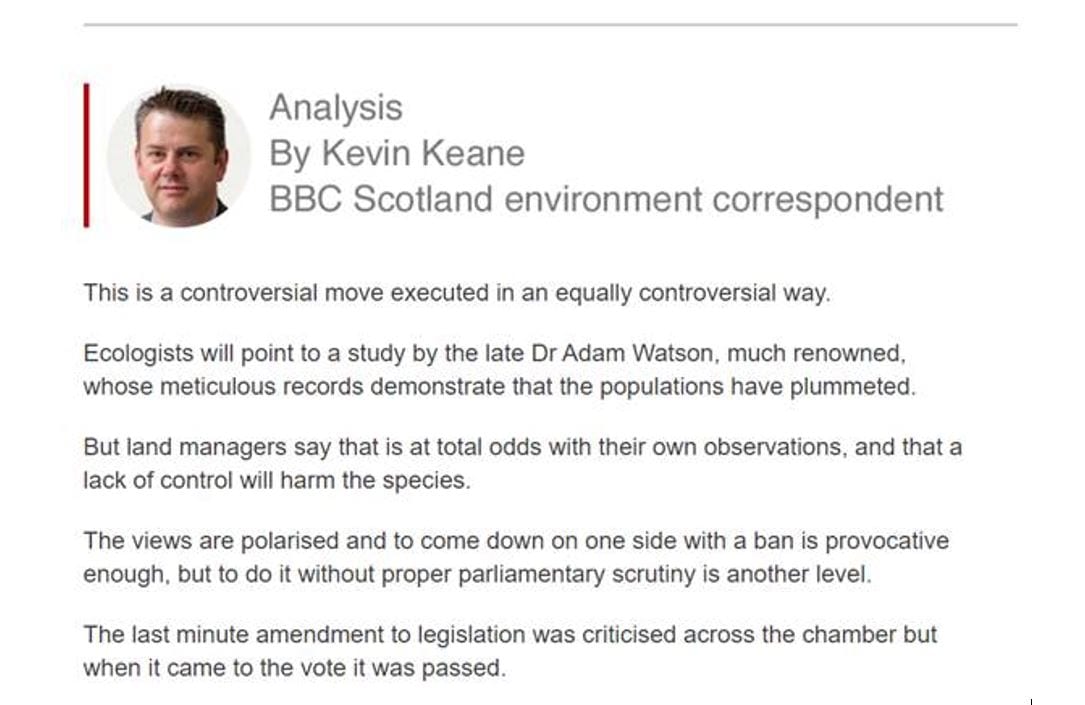 Vicarious Liability on trapping and snares:

This amendment, proposed by Labour this time, was passed and introduces vicarious liability for the use of traps and snares in Scotland. It will probably move us towards a training requirement.

This is already in place for snaring in Scotland and may now be required for the use of crow cage traps, spring traps and live capture traps. This would allow an employer, for example, to evidence due diligence. We are also aware that such training was recommended by the Werritty Review.

None of this will assuage concern over the potential for criminal interference with traps and snares. BASC undertook a survey of this for Scottish Government ten years ago and the proposition of illegal interference is as strong now as it was then.

The tail docking amendment that sought to ban the exemption for working gundogs was probably the item that drew most gasps when seen on the order sheet. The issue was heavily debated only three years ago, when the exemption was brought in.

In that time, the Scottish Government-funded research remains the only piece of relevant evidence on the topic. It says quite clearly that the life-time welfare benefit of a working gundog favours tail docking.

As one MSP put it, this potential amendment was simply virtue signally and grandstanding from the Green Party. The chamber was in agreement that this amendment was completely unnecessary and was voted down.

BASC will be first in the queue to ensure any decisions on licensing for the management of mountain hare is acceptable and workable. We are clear in our views that, without management, the mountain hare will suffer further.

BASC along with seven other rural organisations has already contacted the Minister with licensing proposals.