Peter Marshall is BASC's head of training and education, and an experienced shotgun coach and instructor.

I know there’s a world of difference between shooting real pigeons and their clay counterparts, but I was surprised recently to see a friend really struggling to make an impression on some woodies he was decoying. 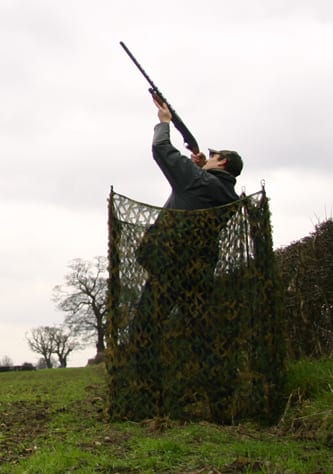 As far as I could see he was doing everything by the book; including letting the incoming birds decoy in close and waiting until they were committed to land before moving to fire. The first barrel was generally a hit, but the problems arose on the second shot. This resulted in a pretty disappointing kill-to-cartridge ratio.

Take the most difficult first

This example shows why it’s important to shoot the more difficult target/bird first. Take the easier target with the second shot.

Modern decoying equipment such as whirlies or magnets, although attracting pigeons to your pattern, can if inappropriately placed, cause the pigeons to jink and flare. Therefore making the shots more difficult.

To consistently hit the target, make sure your landing zone in the decoys is a sensible distance (20 -30 yards). This gives your gun and cartridge combination the best chance of success. Moving your decoys closer also gives you the time and distance to take a second bird.

Moving the technique to clays

Back on the clay ground, though, I think everyone would agree that it would be so much simpler if all the birds were thrown as singles, but it would also be unbelievably boring.

Shooting pairs is tricky and a test of technique and concentration. But, if we can shoot them consistently as singles, surely we must be able to hit them as pairs?

The main reasons for missing a second bird are generally because we don’t focus enough; we don’t think hard enough about what we’re trying to do, or how we’re going to do it. There is also the possibility that the first shot can knock the stance and gun mount out of shape. Therefore, make sure that your stance is appropriate and that your gun is still shouldered properly.

Sometimes dropping the gun out of the shoulder and remounting it between shots can refocus the mind and ensure a more reliable placement in the shoulder.

There is, however, a simple solution, a golden rule if you like…

Always treat every combination as two single targets, and two separate shots… clearly identify the target you want to shoot first and commit to it.

It doesn’t matter if they are thrown simultaneously, on report or as a following pair. The birds still need to be broken one at a time.

Some of the professional pigeon shooters allow some birds to land. They take a bird committed to landing before shooting a pigeon in the process of taking off. This could also be simulated with an incoming target followed by quartering-away bird on report.

Here's a few things to remember when practising...

Always study the targets closely before it’s your turn to shoot and focus on the birds. Try to remember their flight path and build up a picture in your mind of how you’re going to shoot them.

It’s really important you know where the second target’s going to be after firing the first barrel because the muzzles of your gun will need to come straight onto the pick-up point you’ve chosen for the second target.

Don’t worry about where the other shooters are breaking their targets. Obviously you can make a mental note of where they break their clays, but don’t forget that everyone’s reaction times and vision are different. So, if your mental picture of the shots tells you to shoot them either sooner or later than your fellow shooters do. Follow your instincts.

Pay attention to the speed and the timing of your shots. If you feel you hit the first pair comfortably enough, don’t be tempted to shoot the next pair a little bit faster or slower. A consistent rhythm will give you consistently good scores.

Don’t be tempted to shoot ‘gun up’ for the second bird. I’m not saying that you have to dismount the gun completely, as quite often you simply won’t have the time. But, by taking the stock just a couple of inches from the pocket of your shoulder you get a better, clearer, view of the next target.

This will also re-align your gun when you re-mount it. Doing this also helps you think of the pair as two completely separate targets.

Another factor that helps you keep the clays separate is foot movement. Just shifting an inch or so between shots can make a huge difference as it provides another natural break between the shots.

As best you can, try to point your leading foot towards the break point of each clay. This will improve your manoeuvrability at the break point, allowing for a smooth and fast swing, decreasing the chance of missing behind.

Here the difference between clay and live pigeons is really noticeable.

With pigeon shooting, you ideally want to wait until the birds are committed to land with their wings beating backwards. Remember, the pigeon is slowing down, whereas the clay is often speeding up as it falls.

However, with clays the trick is to hit them when they’re still under power and travelling forward. If you wait too long, until the bird is closer, the target will slow and start dropping under its own weight.

Also, it’s more likely to be affected by any wind, so its line of flight is going to be much more unpredictable.

If you have to shoot the bird ‘on the way down’ make sure you give it substantially more lead than your mind tells you is necessary, simply because it will drop quicker than you think.

Push yourself if you are hitting the target without too much problem. Take the target earlier or later, or get your friend to button/release the target when he is ready, not when you call – after all pigeons do not decoy on command!

Having read Peter’s top tips, do you want to practise your new found skills on incomers?

Why not ask your local clay ground (if it’s open!) to put on a pigeon shooting stand, maybe even with a complete set of nets and decoys.