Green Shoots in the South West

Hello and welcome to the Green Shoots in the South West web pages   The Green Shoots Project, a pioneering scheme in the West Country, began in September 2002 with the recruitment of Robin Marshall-Ball as the Somerset Levels conservation officer (SLCO), a post co-funded by BASC and English Nature.

The scheme was initially established for a three-year period. However, in 2005 the Environment Agency joined the partnership, which enabled the project to be extended for a further period of three years. Due to the project’s success funding continued on a yearly basis until 2011, when the SITA Trust provided funds for a major three-year project to protect and enhance the water vole population in south Somerset and west Dorset.  Robin’s role expanded to manage the new scheme, and at the same time James Green, BASC’s South West regional officer, became actively involved in promoting Green Shoots throughout the region, spearheading the West Somerset and Devon Headwaters project which is funded by the Environment Agency.

The core objectives of the Green Shoots project are to:

Follow the tabs to learn more about the work in the South West and the many diverse activities that you could take part in. 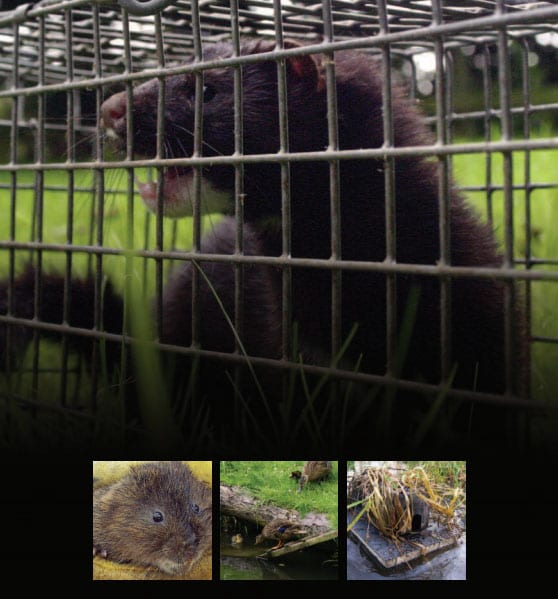 If you haven’t already done so, then please log on to the Green Shoots Mapping, map your shoot and provide wildlife records. Providing this information, wherever your shoot is, will help BASC protect and promote the sport. You can also produce custom maps of your shoot, marking relevant data such as access points, drive locations, high seats, etc to share with friends or Guns.

For those of you who provided data in the past, thank you. You have helped protect the future of our sport. When you log into Green Shoots Mapping you will see the shoots you told us about in the paper survey already mapped and waiting for you. You can then amend the shoot boundary if you need to as well as update the record of species and habitats that use it.

Please use Green Shoots Mapping; you’ll be helping us protect and promote shooting while benefitting from being able to manage and monitor your land online.

Green Shoots on the Somerset

Since 2002, wildlife surveys on BASC members’ land have produced nearly 2000 new wildlife records for the Somerset Environmental Record Centre and other partners and reinforced the point that most shooters are also keen wildlife observers and conservationists. These records gave a clearer picture of the distribution across the Levels of vulnerable species such as skylarks, yellowhammers, owls, bats, breeding waders, and water voles.

Following from these surveys, over 70 BASC members and landowners have become involved in specific conservation projects.  The table below summarises the range and extent of what has been achieved since the launch of the project through some of these projects.

The size of the land holdings ranged from four acres to nearly 300 acres, and the land type varied form seasonally-flooding marshy grassland to rolling limestone hills (the Mendips) and dry ground ridges with broad-leaved woodland and arable fields.  It is important to note that over 70% of these activities are self-funded through small-scale shoot subscriptions (co-funding by family and friends), or funded through a more formal shooting syndicate fee.

Table summarising the increases in biodiversity over the 10 years of the Somerset Levels Green Shoots project.

Water voles (arvicola amphibious), once common on waterways throughout the UK suffered a population crash in the late 20th Century and it was feared that the species would become extinct after the millennium. This situation has been attributed to both loss of habitat and to predation by American mink. By 2002 the Somerset Levels held only a few relic populations of water voles until BASC took the lead in their conservation in association with our partners.

A BASC programme of mink control and habitat enhancement across the Levels was launched in 2003, a project involving not only BASC members, but also gaining multi-partnership support from anglers, the Wildlife Trusts, RSPB, the Environment Agency, and Natural England.

A trapping and monitoring team was recruited and mink control became a co-ordinated effort across the Somerset Levels from Gordano on the Bristol Channel to Martock in South Somerset.

To date over 600 mink have been trapped and the rapid expansion the water vole population in the last ten years  has been hailed as a major conservation success story.  Accounts of the project have appeared in UK conservation publications and also in European journals.

Building on this, BASC’s conservation and control activities have also been adopted in Devon, Dorset, Gloucestershire, and Gwent 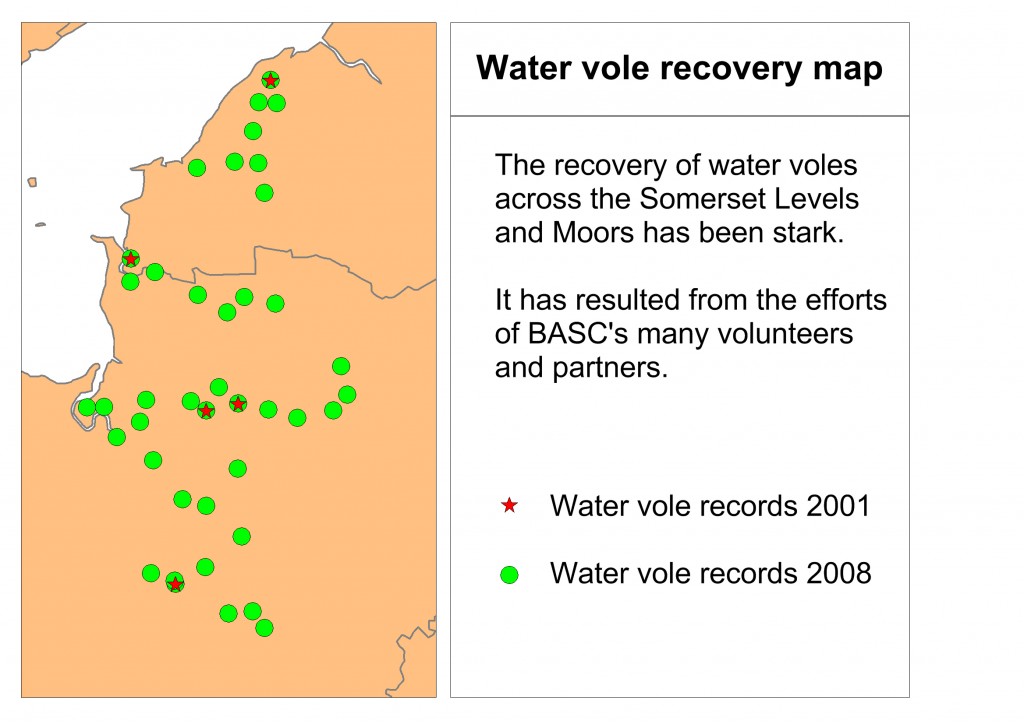 Launched in November 2011 this three-year project funded by the SITA Trust and BASC seeks to build on the Somerset Levels mink control network and to extend mink control and habitat enhancement for water voles from south Somerset to the west Dorset coast, thereby establishing a mink ‘firewall’ from the Bristol Channel to the south coast – a zone named the ‘Cordon Sanitaire’ by the Environment Agency.

In 2012, though greatly hampered by spring and summer flooding catchment water vole surveys in the upper Parrett and Brit river systems were carried out in order to establish a ‘base line’ of known water vole colonies. This has continued into 2013 and is still work in progress. Working with a specialist surveyor from Rookmarsh Ecology, one BASC staff member and six volunteers were also trained in riparian survey techniques.

At the same time, a volunteer team has been recruited in both catchments, using mink rafts to monitor the survival of existing water vole colonies and to detect/remove any mink in the area.

Three ‘Mink & Water vole workshops’ were held at Long Sutton and  Beaminster in the spring and summer of 2012 and a core volunteer team recruited from local BASC members, angling clubs, the Dorset Wildlife Trust, and the Westcountry Rivers Trust.  Any volunteers  recruited after these events are also given full training.

A half-yearly newsletter was sent to all volunteers and partners in August 2012 and the 2013 edition is in preparation. Our newsletters can be found on the download tab. 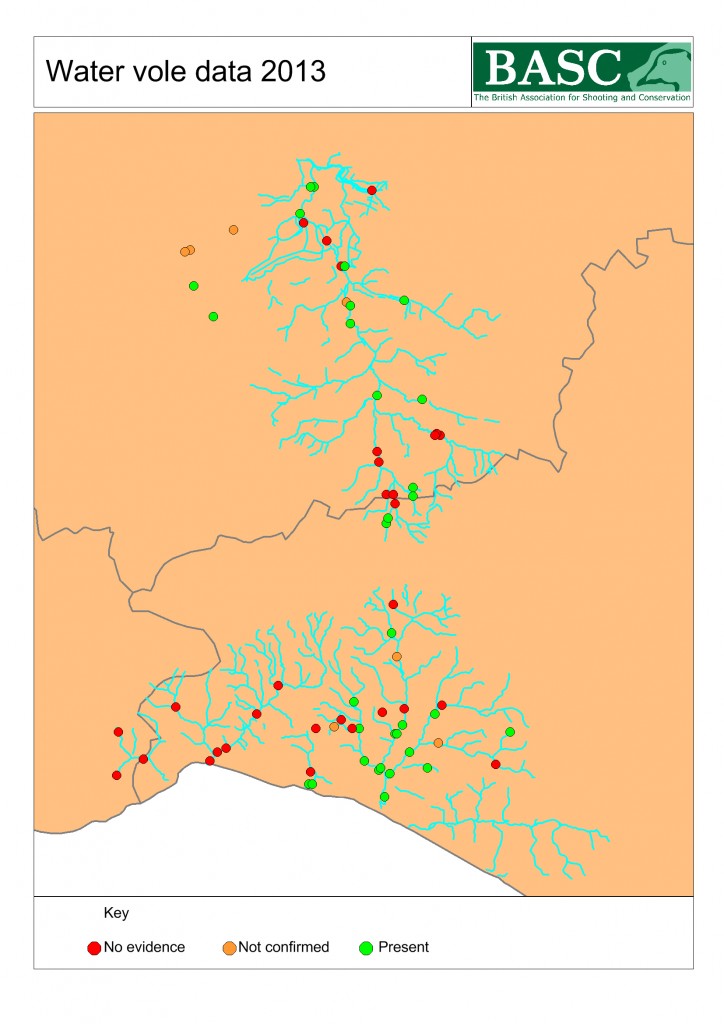 BASC’s long-term partnership with the Environment Agency on the Somerset Levels expanded in 2012 to cover more populations of water voles in Devon and the far west of Somerset.  These project areas dovetail in the with the work being undertaken on the Somerset Levels and through the SITA Trust funded South Somerset and West Dorset Water Vole Projects.

The River Tone is being surveyed for water voles in 2013 to establish their current distribution which will allow us compare this in the future as we further develop the mink control network.

We are working with Tale Valley Trust to support and expand their network of mink control volunteers.

If you would like to help us on the River Tale or River Tone then please contact James Green.

The River Axe mink control network is being developed and managed by BASC upstream of char junction and downsteam by our partners East Devon District Council. Robin Marshall-Ball is expanding the network for BASC and if you can help then please contact him.

Green Shoots in the South East

Green Shoots in Wales Action under BASC’s biodiversity plan, Green Shoots, started in Wales in 2005 when BASC asked members living in North Wales to complete a survey of the wildlife on their shooting land. We used that information to work with members and partners to run conservation projects on

Green Shoots Mapping allows you to: