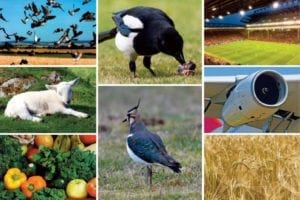 The impact of ‘pest birds’ on public health and safety, aircraft security, crops, livestock and vulnerable, red-listed species is outlined in a briefing document published today by BASC.

The document will be sent to all MPs in the wake of Natural England’s decision last week to withdraw three general licences for the control of pest birds in England.

The document is also for members and the wider shooting and rural community to give the facts in one place to help challenge the myths and fake news posted online.

It is supported by an infographic which highlights headline facts.

BASC chairman Peter Glenser QC said: “The facts, the figures and the evidence speak for themselves. The chaos caused by Natural England’s decision runs much deeper than the countryside.

“Our briefing document shows it stands to affect people’s health, livelihoods and the environment and people’s day-to-day lives in cities and the countryside.

“Livelihoods could be lost, people will be out of pocket, livestock will be unprotected and conservation efforts will be in crisis.

“Our members and the wider shooting and rural community can use this document as a point of reference to deal with the misinformation that has been peddled in the last week since NE announced its appalling decision.”