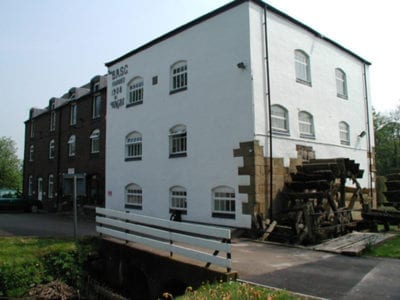 Marford Mill was constructed in 1086 and is recorded in the Domesday Book. It was the only mill in the area until 1474 when a second mill was built on the opposite side of the road. With two mills so close to each other they became known as the Lower and Upper Mills. When the county borders changed so did the naming of the mills to Rossett Mill and Marford Mill.

In 1791 Marford Mill was destroyed by fire and replaced by the present building which was reconstructed on the original foundations. It’s not known when the mill stopped grinding corn, but in 1972-73 it was saved from dereliction and converted into offices and taken over by Maxwell Homes.

In the 1980s, it was purchased by the Wildfowlers Association of Great Britain and Ireland (WAGBI) which in 1981 became the British Association for Shooting and Conservation (BASC).

In 1985, the stable block at the rear of Marford Mill was converted to provide offices, with further renovations taking place in 1998. 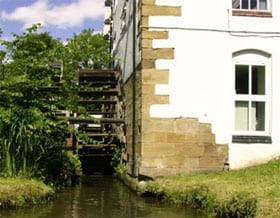 In 2005, BASC’s site supervisor, a qualified joiner, with the help of local craftsmen, renovated the water wheel at the side of Marford Mill, while a BASC member provided specialist green heart wood from Scotland. At the time, the wheel was virtually falling to pieces and in quite a dangerous condition, and although it will never be a working mill wheel, it turns when the pressure of water in the mill steam increases.

Marford Mill is unusual because it has two wheels (there are not very many of these left in the country) and it draws water from underneath, whereas the majority of single mill wheels take water from above.