Marta Jacyna visits a Scottish estate that has set up a profitable game processing operation which could provide the model for shoots of a similar scale.

One of the key challenges facing game shoots today is ensuring that their shot birds correctly enter the food chain, as required by the Code of Good Shooting Practice. Many shoots will have an established game dealer who will collect or accept their birds in feather and process them for the market. But the Glenalmond Estate in Perthshire has shown it is perfectly feasibly to set up a successful small-to medium-scale game processing operation with a modest investment.

Brian Dickson has been head lowland keeper at Glenalmond for 26 years. He is passionate about shooting, the environment and what we, as shooters, should be doing to secure the future of our sport.

“A saturated game meat market is the greatest threat to shooting by far,” he said. “We have absolutely no defence for shooting game if it goes to waste. We must ensure that everything we shoot ends up on the table.” 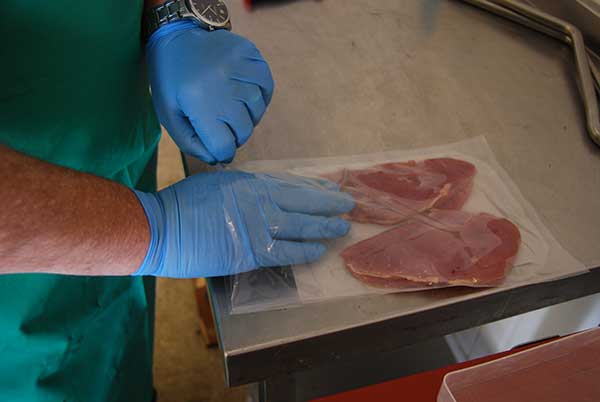 An estimated five million pheasants, ducks and partridges are shot in Scotland each season. And Brian is confident there is plenty of consumer demand for them. From ‘posh’ restaurants to small local pubs and hotels, everyone is keen to have game on their menus.

Glenalmond took the plunge last year and invested in a few basic pieces of processing equipment. Thanks to a vacuum-packing machine costing around £1,300 and some professional-looking stickers, Brian can sell neatly-packaged game and make a decent profit.

“We sell packs of four pheasant breast fillets for £2.50 to shoot members and £3.50 to local businesses. Before, team members would take a brace of in-feather birds. Now, most people take several packs away.” The packaged game is also given to the many guests that visit the estate and it is very popular. “We ask our clients only for a donation. Last season we raised £4,000 which went to support shooting in Scotland.”

The estate hosts around 40 to 50 shoot days each season, with bags from 200 to 300 birds, including grouse, pheasant, partridge and duck. In their first season using the new equipment, Brian’s team processed around 50 per cent of their shot game. They hope for 60 per cent this season with phase two of the venture.

The plan is to build an additional facility to process whole birds, buy a plucking machine to speed up the processing and purchase an industrial mincer to turn the remaining parts of the carcasses and badly shot or bruised birds into dog food. Further ahead, Brian wants to get a large freezer so he can sell ready-frozen game, and is also looking at sausage and burger machines.

Brian’s first step was to register as a small meat/game producer with the local council. Asking for help and advice from the off is key. Perth and Kinross Council told Brian that he could sell his game in Perthshire and within a 32-mile radius of the county. The estate can sell up to 10,000 birds and 300 deer without the need to register as a large-scale producer (note: to sell venison in Scotland, you do need to be a venison dealer).

Brian recommends asking local businesses what their specific needs might be. “We found that many chefs would rather purchase crowns and require the legs for confit or sauces.”

If you’re running a similar project or want to give it a try you can contact BASC’s game and gundogs department for advice via email or 01244 573 019).