A long way from home:
the invasive species Macnab 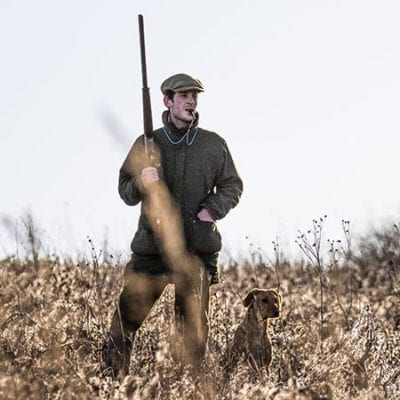 Will Pocklington is BASC’s Head of Publications. He is a passionate countryman with a strong interest in wildlife conservation, deer stalking, game shooting and working dogs.

One morning in Autumn 2020, two wild food fanatics, and three prolific and remarkably successful non-native animals… A telling example of the important role shooters play in the management and control of invasive species.

At exactly 06.30, as if well briefed on proceedings, a muntjac emerged from the willow coppice below us and began making his way uphill. It was a buck, some 120 yards from where we lay prone in wait. His timing was impeccable…

Autumn had just taken the baton from summer and my friend and fellow wild food fanatic, Joe, had joined me in search of a Macnab. Well, sort of… Mention of the ‘M’ word where stags, salmon and grouse don’t feature, tends to rub up the wrong way the die-hard purists. Really, our endeavours in Lincolnshire were a world away from the traditional challenge of the Scottish Highlands.

The truth is, the journey to my ‘hunting’ ground saw me spend the thick end of just seven minutes in the car. And I didn’t need to travel far, because, over the course of the last 130 or so years, the three species we’d be in search of have travelled more than 10,000 miles between them to rest and thrive with startling success on our doorstep.

The aim: To take a muntjac, a grey squirrel and a brace of American signal crayfish within a mile of one another on the same estate, eat what we could over a fire by the brook and save the rest for another day. In other words, an invasive species Macnab.

I’d be behind the camera; Joe would be wielding rifle, shotgun and line. With a bit of luck, we’d be home to spouses by midday, mission accomplished and a small victory against a prolific trio of non-native invaders under our belts.

Fully expecting the muntjac to be the most difficult of the three species to procure, we’d planned to arrive on a woodland edge overlooking a grass valley before first light.

These compact, non-native deer have been culled on the estate in question for a number of years now. Keeping numbers at low levels minimises pressure on woodland flora and the pheasant feed hoppers dotted about the place.

It’s an ongoing campaign, but the results mean it’s not every morning a muntjac is happened upon. This, coupled with high, leafy cover that easily conceals the frame of a small deer, only added to the challenge.

‘Munties’ certainly keep you on your toes; they’re very mobile and don’t tend to hang around for long. Even when their busy shape fills the lens of your rifle scope, a suitable or safe shot is far from guaranteed.

It just so happened that on this morning, with the breeze perfectly in our faces and the sun rising to warm the coppice edge at the field bottom, an obliging buck appeared from the thickets and stopped for the shot.

Fifteen minutes later, we made the short walk to find him expired a brief, adrenaline-charged run away from where the bullet had found its mark in the crease of his shoulder.

After a quick gralloch, with the pristine liver preserved for a stalker’s brekkie and the buck left hanging from the gambrel to cool in the morning breeze, the rifle was swapped for Joe’s silenced .410, our attention now skyward.

The canopy was thick. A stiff breeze swayed the treetops gently above us as we worked our way along a belt of sycamores that looked likely – prime squirrel territory.

It wasn’t long before the first sign of movement and Joe was frantically clawing at the top brass of his maiden spent cartridge while in hot pursuit of the grey that had evaded its contents.

Squirrels on the run so often do the wise thing and freeze, immobile on a bough, which makes them hard to spot, especially in early autumn. This one was no different and for a while we thought we’d lost him. His next leap would be his last, however. Crayfish were calling…

We knew our final task of the morning before the cook-up would almost be a formality. It was a scouting mission as much as anything to determine the best spots for Joe to set his crayfish traps, licence pending*.

The brook that weaves its way through the centre of the estate is a stronghold for American signal crayfish.  An invasive species in every sense, these ravenous bank burrowers have established themselves and multiplied in number over the years, much to the detriment of their native white-clawed cousins. In the warmer months they’re active and easy to catch. They taste good, too.

An S-bend near a bridge is where we’d cast the exploratory hand lines, and, sure enough, it was only a moment later that the first of the greedy crustaceans was dragged onto the bank-top, our ‘Macnab’ complete.

A few more followed – enough for a proper ‘surf and turf’ – before we set to prepping the food. We’d decided to cook simply atop a wooden ‘rocket stove’, removing the need for gas.

Late morning: a muntjac in the estate chiller; one less bark-stripping, hopper-raiding squirrel; and a lovely spot to launch a campaign against the crayfish over the coming years – that breakfast tasted damn good…

On the front line

In 2018, an Environmental Audit Committee report called for a ‘citizens’ army’ to tackle the growing threat from invasive species, estimated to cost Britain’s economy £1.8 billion a year.

Invasive non-native species (INNS) are considered one of the UK’s top five threats to the natural environment, according to the report, and the UK is at threat from between 36 and 48 new INNS as a result of climate change.

BASC members are on the front line, trying their best to control and manage many invasive species. And as an organisation we are actively involved in projects such as grey squirrel management with partners ranging from the UK Squirrel Accord and The National Forest to government agencies and local estates. We have also been in projects that focus on American mink.

*The results of new research by UCL and King’s College London have been published in the Journal of Applied Ecology since the events reflected on in this article took place. According to the study, trapping of American signal crayfish is ineffective in determining and controlling their numbers, as the vast majority of individuals are too small to catch using standard baited traps. The study concluded that conservation efforts should re-focus on promotion of aquatic biosecurity, and highlighted the need for further research to better understand the invasion biology of American signal crayfish. Read more online here.