A Home That Works: Stories of Success 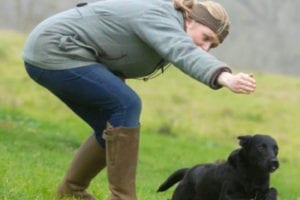 Ellena Swift is a dog trainer, breeder and Shooting Times contributor, with a particular passion for Labradors.

Throughout my time working with dogs, I have encountered and facilitated a lot of dog rescues and rehoming cases. Sadly, it is the nature of the beast. Circumstances change, dogs aren’t what owners expected, or perhaps wanted, and as a result the dogs find themselves in shelters, kennels or foster homes.

I foster for the amazing charity called Black Retriever X Rescue and also help clients when they approach me with dogs they simply cannot cope with. 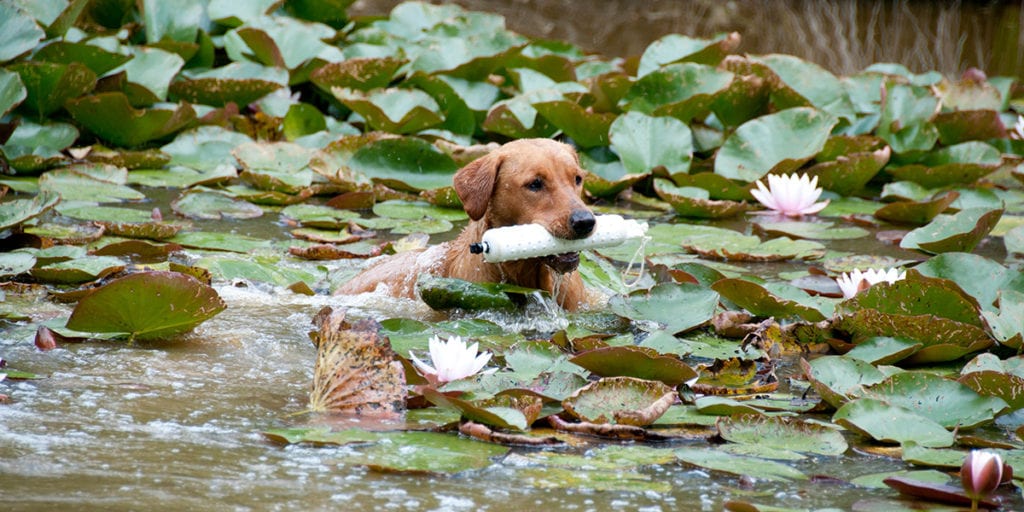 One such rescue story was a gorgeous black Labrador called Sam. His breeder is a good friend and produces fantastic working/pet lines. She contacted me, rather upset that one of her puppy owners had reported their puppy was uncontrollable and they were sending him away to be trained. She asked that if they sent him anywhere, he came to me.

In the short life of this seven-month-old dog he had been kicked out of puppy training for biting, drawn blood from a Poodle on a walk and hurt the children several times by jumping up or mouthing.  He was (in their words) out of control.

They had seen no less than three dog trainers in London, none of whom had managed to calm Sam down or help. As I know his breeding, I was somewhat surprised that such a little devil could come from those lines.

When he arrived, he dragged the husband across the paddock, barking at everything and ignoring his owner’s very existence. I let my GSD bitch out, who is the best ‘nanny dog’ and puppy trainer I have. She is cool, calm and confident, teaching puppies manners through play and keeps them in check.

The husband immediately told me to shut her away lest Sam attack her.  I doubted this would be an issue and let him off.  In seconds Tilda was stood over Sam who was on his back, wagging his tail, licking her muzzle.

I introduced more of my pack and he displayed nothing but boisterous puppy behaviour. I kept him for two weeks in total, covering heel, sit, recall and basic retrieves, all of which he shone at. 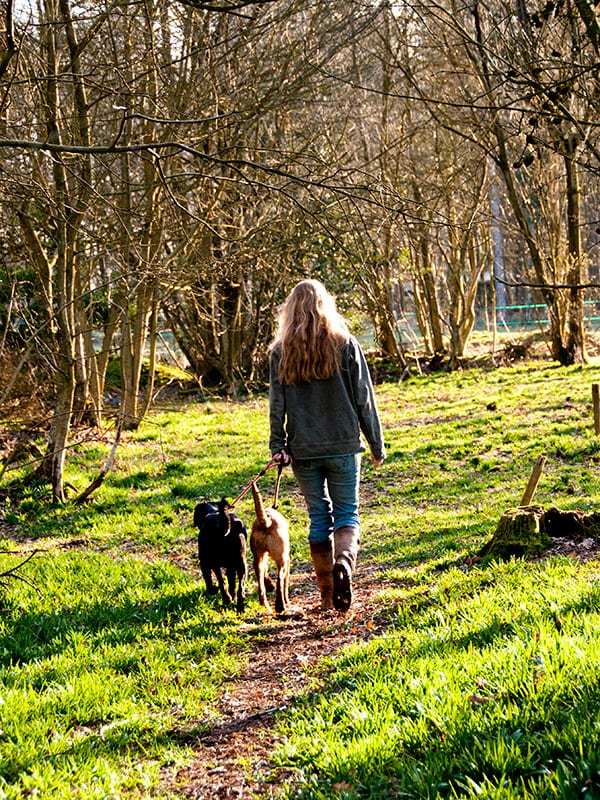 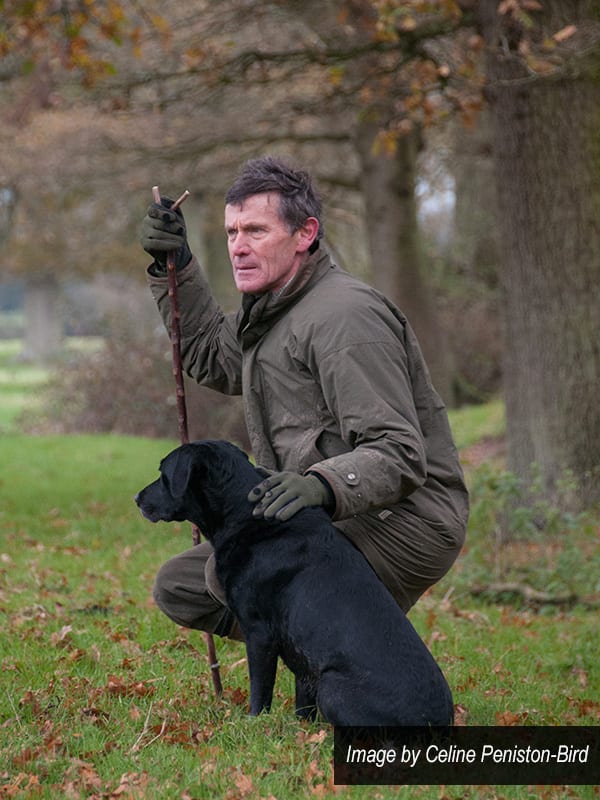 At the end of his fortnight with me, the family called to say that life was much easier without him and they were going to send him to rescue centre to be rehomed. Knowing he would never be placed in a working set up if sent to a national rescue organization, I pleaded with them to let me help with finding him a new home.

I called a friend who I knew was looking for a new dog. One conversation and an hour later, Sam travelled three miles up the road and was home with Chris and Lin.  Sam is now seven years old and has impressed Lin beyond all expectations with his temperament, drive and natural abilities.  She goes as far as to say that he is “the best picking up dog we’ve ever had”.

Rescues and rejects can shine

Sarah of Tollerhome Working Gundogs is a shining example of someone who can get the best out of a dog in spite of its start in life.  Nearly her whole pack of working dogs are rescues and ‘rejects’.

Her first spaniel was rehomed because she was so noise sensitive; completely gun shy and potentially useless as a working dog. Despite this, she still had the energy and brain of a working spaniel.

Fortunately, Sarah saw past her issues and after some structured training, she began working. From the age of 18 months to now (11 years) she has hardly missed a day in the field. 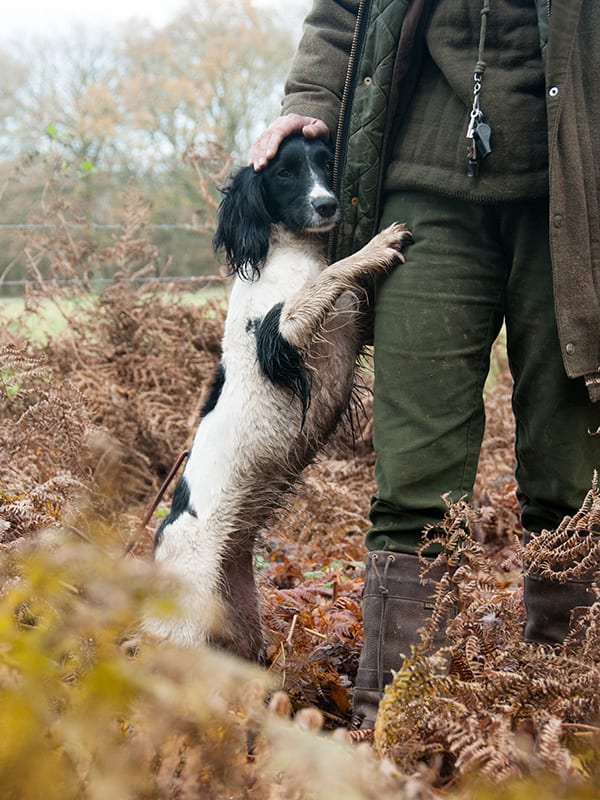 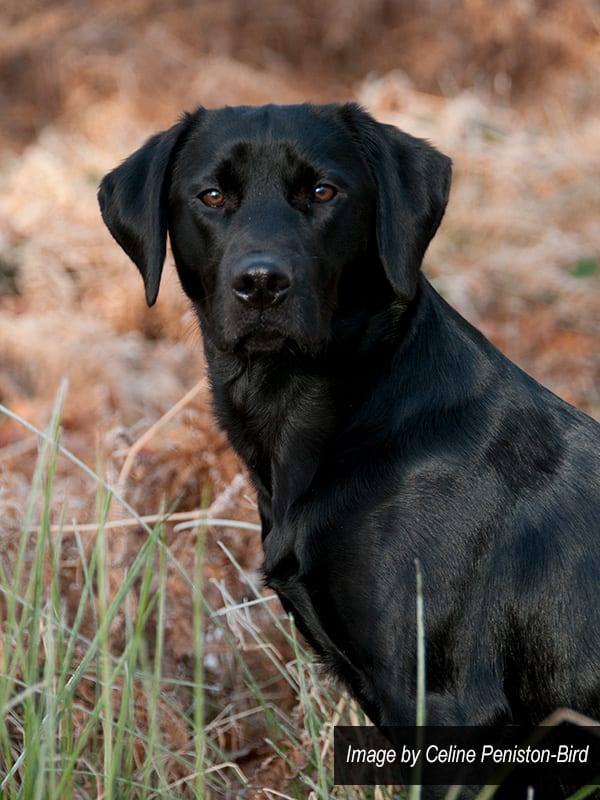 Another of Sarah’s spaniels was one she took on at two years old from a family who simply couldn’t cope with her as a pet. Having tried the normal pet trainers, the dog just couldn’t be reined in. She would run the second let off lead with no desire to be near her handlers.

Eventually, they found Sarah and after seeing the difference in her they decided the best thing for the dog would be to remain in a working life and environment.

Not restricted to traditional working breeds, Sarah has also taken on a German Shepherd. She had been permanently muzzled and never allowed off the lead. She reportedly attacked every dog and person she saw.

Now, just a few months down the line, this lovely dog goes out beating, sitting on the beaters’ wagon, mixing with strange people and dogs with never an issue. 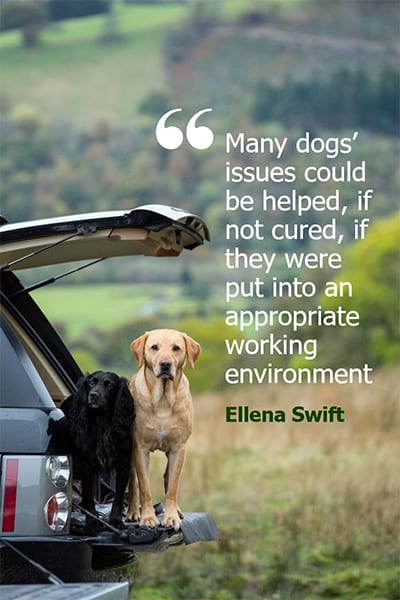 Many dogs’ issues could be helped, if not cured, if they were put into an appropriate working environment. It is a common, reoccurring problem.

People who work their dogs are normally extremely experienced, familiar with breed traits and exercise and stimulation requirements.  So often pet homes unfortunately cannot offer the dog what it requires.

I believe that every working dog owner knows of, or has been directly involved in, a rehoming success case.  Working breeds need work and the right stimulation. To deny them this is to deny them their basic desires and instincts which in my mind is a cruelty in itself.